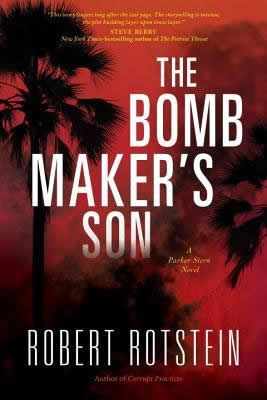 A fugitive from justice shows up on Parker Stern's doorstep, seeking representation. Ian Holzner, better known as the Playa Delta Bomber, is about to be arrested for allegedly planting a bomb that killed four people in 1975. Parker turns down the case, until the revelation of a startling secret from Parker's estranged mother all but forces him, against his better judgment, to change his mind.

As media attention swirls around the reemerged Playa Delta Bomber, a bomb explodes and other violent acts occur. Is Holzner the mastermind behind these new attacks? At great personal risk, Parker tries to uncover the truth, all while discovering long-hidden, painful realities about his family and his own past.

Reviews:
“Memorable characters and themes that are just as timely today as they were in the ’70s help make this a deeply satisfying page-turner.”
—Publishers Weekly


"The Bomb Maker's Son is a fast moving legal thriller with more than one surprise and enough moral dilemmas to fill up a law school exam."
—Phillip Margolin, New York Times bestselling author of Woman with a Gun


"With a hero chasing his own shadowy instincts and duplicity everywhere, this story lingers long after the last page.  The storytelling is intense—the plot building layer upon tense layer—making for a welcome addition to the legal thriller genre."
—Steve Berry, New York Times bestselling author of The Patriot Threat