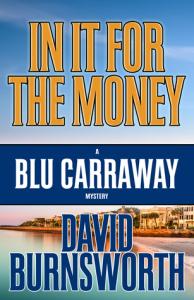 In It For The Money: Blue Carraway Mystery

Lowcountry Private Investigator Blu Carraway needs a new client. He’s broke and the tax man is coming for his little slice of paradise. But not everyone appreciates his skills. Some call him a loose cannon. Others say he’s a liability. All the ex-Desert Storm Ranger knows is his phone hasn’t rung in quite a while. Of course, that could be because it was cut off due to delinquent payments.

Lucky for him, a client does show up at his doorstep—a distraught mother with a wayward son. She’s rich and her boy’s in danger. Sounds like just the case for Blu. Except nothing about the case is as it seems. The jigsaw pieces—a ransom note, a beat-up minivan, dead strippers, and a missing briefcase filled with money and cocaine—do not make a complete puzzle. The first real case for Blu Carraway Investigations in three years goes off the rails.

And that’s the way he prefers it to be.