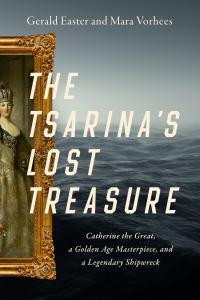 The Tsarina's Lost Treasure: Catherine the Great, a Golden Age Masterpiece, and a Legendary Shipwreck

A riveting history and maritime adventure story about priceless masterpieces originally destined for Catherine the Great.

In October 1771, a merchant ship out of Amsterdam, the Vrouw Maria, crashed off the stormy Finnish coast, taking her wonderous cargo to the depths of the Baltic Sea. The vessel was delivering a dozen Dutch masterpiece paintings to Europe’s most voracious collector: Catherine the Great, Empress of Russia. Among the lost treasures was The Nursery, an oak-paneled triptych by Leiden fine painter Gerrit Dou, Rembrandt’s most brilliant student and Holland’s first international superstar artist. Dou’s triptych was long the most beloved and most coveted painting of the Dutch Golden Age, and its loss in the shipwreck was mourned throughout the art world.

The Vrouw Maria, meanwhile, became a maritime legend, confounding would-be salvagers for more than two hundred years. In July 1999, a daring Finnish wreck hunter found Vrouw Maria, upright on the sea floor and perfectly preserved. The Tsarina and the Lost Treasure masterfully recounts the fascinating tale of Vrouw Maria—her loss and discovery—weaving together the rise and fall of the artist whose priceless masterpiece was the jewel of the wreckage.

Gerald Easter and Mara Vorhees bring to vivid life the personalities that drove (and still drive) Russian high politics, her art and her culture. And in the spirit of Gary Kinder and Robert Kurson, they show how these personalities instersect with the danger and adventure out on the beguiling Archipelago Sea.


"The Vrouw Maria was initially of no great importance—less than 100 feet in length it was just a two-masted wooden cargo ship. But what a cargo and what a story it harbors. The Tsarina’s Lost Treasure takes this long-lost ship and its priceless cargo, and blends in the story of Dutch art and its competitive owners.  And that is just the beginning of the story of Catherine the Great’s lost artworks."—Tony Wheeler, co-founder of Lonely Planet

Reviews:
“An apprentice to Rembrandt, Gerritt Dou eventually surpassed his teacher in fame and wealth. Over the centuries, however, Dou’s reputation has shifted repeatedly with the tides of fashion in the arts. His story makes up one strand of this engaging new book by Easter and Vorhees. An intriguing narrative, and an entertaining yarn whose ending is yet to be written.”—Kirkus Reviews