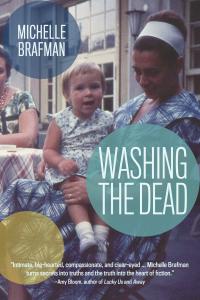 Washing the Dead is the story of a woman confronting a lifetime of painful family secrets and her mother's choices.

In this debut novel from an award-winning short-story writer, a suburban Milwaukee woman confronts her exile from the fondly remembered Orthodox Jewish community that was ripped from her by her mother's affair. When the rabbi's wife summons her to perform the ritual burial washing of her beloved teacher, she returns to the spiritual and emotional home her mother burned down. Exhuming generations of secrets is the only way she can forgive her mother and in turn spare her daughter their crippling family legacy.

“Brafman’s tale of three generations of women shows that woundedness—damage to mind and soul—can travel down the generations, and that so can kindness, courage and, ultimately, self-healing. . . . [Washing the Dead] succeeds in showing how family history has a way of sneaking up on us from the depths of the past, shaping the present in ways both familiar and unexpected.”
—Haaretz

“A heartfelt story of loss, hope, and reconciliation. Through her authentic portrayal of a Jewish community, she captures the complex essence of the mother-daughter relationship with honesty and sincerity.”
—Booklist

“[A] beautifully wrought novel, one in which Brafman examines the inner lives of her characters with the dexterity of a surgeon and the compassion of a saint.”
—Lilith Magazine

“Preparing the dead for traditional Jewish burial is considered the holiest and most sacred mitzvah that a Jew may perform because there is no way for the dead to repay the act of goodness. . . . In performing thismitzvah [in Washing the Dead], the protagonist cleanses herself of hatreds and misunderstandings that she has been carrying around since her youth.”
—Jewish Book Council

“Intimate, big-hearted, compassionate and clear-eyed, in this novel Brafman turns secrets into truths and the truth into the heart of fiction.”
—Amy Bloom, author of Lucky Us and Away

“From roots in one religious tradition, comes a tale of emotional redemption for all of us. Brafman’s astonishing compassion for all human frailty infuses this story about the need for truth and the promise of forgiveness.”
—HelenSimonson, author of Major Pettigrew’s’ Last Stand

“Heartfelt and genuine, Brafman’s Washing the Dead never betrays the complicated truths of family and tradition.”
—David Bezmozgis, author of Natasha and Other Stories and The Betrayers

“Sensual and spiritual, shot with betrayals, Washing the Dead plumbs the destructive power of secrets across three generations of mothers and daughters. In haunting prose, Michelle Brafman offers a riveting glimpse into Orthodox and Chasidic life, and breathtaking insight into what it means to forgive.”
—Dylan Landis, author of Rainey Royaland Normal People Don’t Live Like This

“Brafman…puts her mother-and-daughter characters through the fire. Yet on the other side, each comes out refined, understanding that the legacy of one’s family requires understanding and true forgiveness, which may be the greatest mitzvah of all.”
—New Pages

“Deeply moving. . . . We are eased into an Orthodox Jewish community and a family burdened by secrets as gently as if an old friend were guiding us every step of the way. . . . Washing the Dead is a profoundly hopeful book. I can think of few others that honor ordinary women as simply and as clearly as this one does. Read it to feel how much is possible in the world all around us.”
—Best New Fiction

“Washing the Dead is an illuminating and intricately layered novel about the complicated legacies that pass from mother to daughter, and about the ways that understanding our own history helps make us who we are. Michelle Brafman is an insightful writer who never falters or flinches in her quest to uncover the hearts of her characters.”
—Carolyn Parkhurst, author of The Nobodies Album and The Dogs of Babel

“Like a Jewish Anne Lamott, Michelle Brafman reels you in with warmth, depth and heart. Infused with lush detail about Orthodox Jewish life in the Midwest, Washing the Dead is the story of three generations of women and family secrets that threaten to unravel. Brafman has written a charming and original spiritual page-turner about love, forgiveness, and family life.”
—Susan Coll, Events and Programs Director at Politics & Prose Bookstore and author of The Stager and Acceptance

“Washing the Dead made me ache. This novel is about mothers and daughters, but it is mostly about yearning. Barbara Blumfield’s longing is palpable on every single page: for her mother’s love, for her past, and for re-admittance into a world from which she has been exiled. What a spectacular debut.”
—T. Greenwood, author of The Forever Bridge,Bodies of Water, Grace, and Two Rivers

“From the first sentence, through to the last, Washing the Dead gets at the intricately complicated relationship between mothers and daughters. This book is a rich tale of love, friendship, yearning, and forgiveness. Michelle Brafman’s beautifully-wrought prose quickly cuts to the heart of things: how to live, how to love, and how to care for the dead.”
—Jessica Anya Blau, author of The Summer of Naked Swim Parties and The Wonder Bread Summer

“A riveting and humane account of family pain passed from one generation to the next. In this poignant novel, Barbara Blumfield is a woman still wounded by her mother’s unreliable love. When the religious sect of her childhood seeks her out, she readily responds, but returning to the past means stepping away from her own teenager and threatens to continue the legacy of motherless daughters. How do we begin to forgive those who injured us? Start by reading Michelle Brafman’s unflinching and inspiring novel.”
—Mary Kay Zuravleff, author ofMan Alive!, The Bowl Is Already Broken, and The Frequency of Souls

“This novel has broad appeal. It goes deeply into the lives of a mother and daughter, a wife and mother; it traces the beautiful and obstinate nature of love, all kinds and shapes of love: mother and daughter, husband and wife, and even the love of a teacher and of a friend. Throughout these pages, moving in shadow, runs the terrific responsibility of forgiveness and redemption. . . . Michelle Brafman has done us all a true mitzvah by writing this beautiful book.”
—Robert Bausch, author of Far as the Eye Can See and A Hole in the Earth

“With the knife-blade of her prose honed razor sharp, Michelle Brafman skillfully dissects the bonds of mother-daughter relationships, at once revealing both their toxic and ultimately redemptive nature. She weaves together the sacred and the profane, reverberating silences, exile and return, atonement and forgiveness with the tenderness of a mother braiding the hair of a beloved daughter. Brafman’s novel, moving and wise, shows us that the ultimate mitzvah, like the act of washing the dead, is performed anonymously with no expectation of acknowledgement or gratitude except in the doer’s own heart.”
—Faye Moskowitz, author of Her Face in the Mirror and A Leak in the Heart

“[This] taut, exquisitely written novel explores the complexities of an agonizingly fraught mother-daughter relationship. Michelle Brafman offers a fresh, vital narrative about guilt, love, loss, and the necessity of wrestling with the dark angel of a painful family legacy until it blesses you. June Pupnick, one of the most bewitching and problematic fictional mothers I’ve come across in years, makes a regular habit of escaping her life by ‘gobbling’ up novels ‘without chewing.’ Please resist gobbling this novel. Slow down, savor the richness and generosity of Brafman’s storytelling, and then buy a copy for your most deserving friend.”
—Margaret Meyers, author of Dislocation and Swimming in the Congo