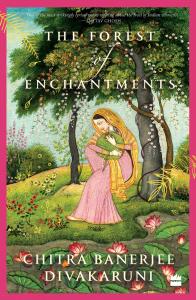 The Forest of Enchantments

The Ramayana, one of the world's greatest epics, is also a tragic love story. In this brilliant retelling, Chitra Banerjee Divakaruni places Sita at the centre of the novel: this is Sita's version. The Forest of Enchantments is also a very human story of some of the other women in the epic, often misunderstood and relegated to the margins: Kaikeyi, Surpanakha, Mandodari. A powerful comment on duty, betrayal, infidelity and honour, it is also about women's struggle to retain autonomy in a world that privileges men, as Chitra transforms an ancient story into a gripping, contemporary battle of wills. While the Ramayana resonates even today, she makes it more relevant than ever, in the underlying questions in the novel: How should women be treated by their loved ones? What are their rights in a relationship? When does a woman need to stand up and say, 'Enough!'

“Chitra Banerjee Divakaruni turns the Ramayana around by telling it in the voice of Sita … this inversion is a gift – it presents us a with a way to know an already well-known story better and to love an already beloved story more.”

“This inspired evocation of the goddess Sita is an epic song of strength and solidarity told with joy and intensity. It brings to life the personalities and predicaments of the Ramayana.”

“Among the many, many Ramayanas there are now even—thankfully—some “Sitayanas”, but I know of none with the special magic that Chitra Divakaruni … brings to the telling.”

“Chitra Banerjee Divakaruni’s Sita … is an epitome of courage and self-respect, showing a path for all women. While weaving a familiar story, Chitra provides deep and surprising insights.”

“Divakaruni’s storytelling talents put her right up there with the best.”

“In recasting the Ramayan as a love story Divakaruni accords Sita parity with Ram, revealing her innate strength. By giving primacy to her thoughts and feelings this also becomes the private tale of Shri and Shrimati Ramchandra Raghuvanshi, two wonderful people who loved each other but who broke up. To readers well-acquainted with that tragedy of modern times, the failed marriage, it will appeal. The ending, however, surpasses all expectations.”

“The success of both The Palace Of Illusions and The Forest Of Enchantments hinges acutely on the skill with which Divakaruni deploys the narratorial voice.”

“The Forest of Enchantments is one of the simplest and most beautiful retellings of Sage Valmiki’s epic.”

“Chitra Banerjee Divakaruni does justice to the women of Ramayana…The Forest of Enchantments is not just a retelling of a much-told epic, rather it is a book that tells it like it is —balanced and non-judgmental… Divakaruni’s retelling reminds her readers that the Ramayana, besides being a morality tale, is a love story at its heart."

"Banerjee is markedly feminist…Her spin on the most pivotal moment of Sita’s life, the agnipariksha episode, is a moment of feminist brilliance. Her Sita answers all the questions we would have had when listening to the Ramayana while leaving us with plenty of food for thought."

"Divakaruni and her women characters are a formidable pair."