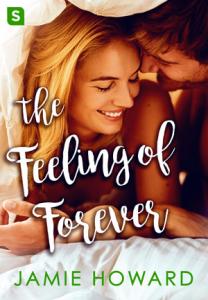 The Feeling of Forever

Juliet St. Clair has spent her life under Hollywood's spotlight. While being America's favorite girl next door has had its perks, having to testify against her stalker to put him behind bars certainly wasn't one of them. But when she thinks about walking away from it all, she can't help remembering the enormous pile of medical bills her family is drowning under. Bills that just keep on coming.

Felix Donovan had it all—stunning good looks, gorgeous women, and a spot as the drummer to a band that's sitting pretty at the top of the charts. Until one life-altering decision left him paralyzed from the waist down. He doesn't know whether to laugh or cry when he wins this year's Sexiest Man award, but the one thing he immediately does is send out a Non-disclosure agreement. Hiding his condition from the public is hard as hell, but he's not ready to face the world while he's still struggling to accept his new reality.

Except this year's Sexiest Woman—Juliet St. Clair—never looks at him with pity, only desire. But falling for Juliet means a permanent spot in the tabloids, a decision Felix isn't sure he's ready to make. And when Juliet's stalker re-emerges from her past, Felix's secret isn't the only thing at stake, it could cost Juliet her life.