David Witwer is a professor of History and American Studies at Penn State Harrisburg, and Director of the Honors Programs. He has published two books on the history of labor racketeering, including Corruption and Reform in the Teamsters Union (University of Illinois Press, 2008), which was named a Choice Magazine Outstanding Academic Book, and Shadow of the Racketeer: Scandal in Organized Labor (University of Illinois Press, 2009), which won the journal Labor History’s Best Book Prize for 2009. 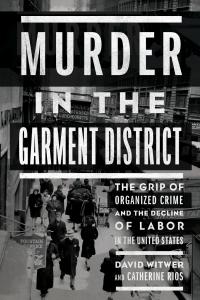 Murder in the Garment District: The Grip of Organized Crime and the Decline of Labor in the United States