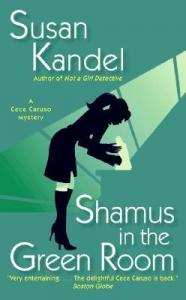 Shamus In The Green Room (A Cece Caruso Mystery #3)

Los Angeles writer Cece Caruso is thrilled that her biography of the legendary Dashiell Hammett is headed for the big screen. Rafe Simic, the actor cast as the lead, may not be the sharpest knife in the drawer, but the money she'll make tutoring him in the ABCs of The Maltese Falcon and The Thin Man should be good enough to feed Cece's addiction to vintage Yves St. Laurent.

But when the dead body of one of Rafe's old flames is discovered—and neither the "facts" nor the hunky star's alibi add up—Cece can't help but ask questions. However, the twists in this case would confound Sam Spade himself. And in her zeal to win justice for the deceased, Cece might end up pulling the plug on the movie—if someone doesn't pull the plug on Cece first.


“The delightful Cece Caruso is back in Shamus in the Green Room, the third in Susan Kandel's series featuring the perpetually 39-year-old ex-beauty queen turned mystery author/amateur detective. These saucy, well-crafted mysteries are a lot of fun.”
— The Boston Globe


“Kandel can be cutting about the fakery of the movie business, but she takes mystery fiction seriously.  And she shows real sensitivity for the tormented genius who dug his own grave when he moved to Hollywood."
—New York Times


“A resident of West Hollywood, California and a former teacher at UCLA, Kandel knows her southern California setting and attractions, and she has definitely done her homework on the background theme of Dashiell Hammett’s life and works.”
—Mystery Scene