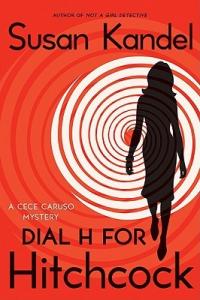 The indomitable Cece Caruso is back in Susan Kandel’s Dial H For Hitchcock. The vintage clothes enthusiast, biographer of masters of mystery, and amateur sleuth who has flourished her skills in Christietown and I Dreamed I Married Perry Mason now tackles a murderous puzzle full of twists, turns, and mistaken identities worthy of maestro Hitchcock himself. Readers will be Spellbound by this latest investigation by sometime-detective Cece, whom reviewers have called, “Delightful” (Boston Globe) and “A hoot” (Denver Rocky Mountain News). True mystery fans would have to be Psycho to miss Dial H For Hitchcock.

Reviews:
“So, are we agreed that chick lit mysteries have pretty much run their course, elbowed out by sexier trends involving vampire detectives and blasphemous reincarnations of Jane Austen? That thinning out of the lightweight mystery field makes more room for real charmers like Susan Kandel’s clever series featuring Cece Caruso, an amateur sleuth who lives in West Hollywood and writes biographies of dead mystery authors to support her passion for vintage clothes.”
—New York Times


“The fifth in the Cece Caruso series is another breezy, entertaining entry. ”
—Booklist