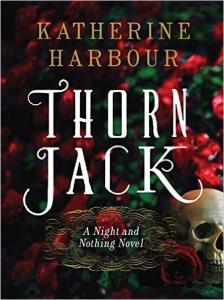 Thorn Jack: A Night and Nothing Novel

Combining the sorcery of The Night Circus with the malefic suspense of A Secret History, Thorn Jack is a spectacular, modern retelling of the ancient Scottish ballad, Tam Lin, a beguiling fusion of love, fantasy, and myth that echoes the imaginative artistry of the works of Neil Gaiman, Cassandra Clare, and Melissa Marr.

In the wake of her older sister's suicide, Finn Sullivan and her father move to a quaint town in upstate New York. Populated with socialites, hippies, and dramatic artists, every corner of this new place holds bright possibilities, and dark enigmas, including the devastatingly attractive Jack Fata, scion of one of the town's most powerful families.

As she begins to settle in, Finn discovers that beneath its pretty, placid surface, the town and its denizens, especially the Fata family, wield an irresistible charm and dangerous power, a tempting and terrifying blend of good and evil, magic and mystery, that holds dangerous consequences for an innocent and curious girl like Finn.

To free herself and save her beloved Jack, Finn must confront the fearsome Fata family . . . a battle that will lead to shocking secrets about her sister's death.


“The maiden enchanted by the cursed boy and the fair folk eager to have others pay their dreadful . . . tolls are familiar tales. . .Harbour puts these well-tested ingredients to good use in the first novel in the Night and Nothing Trilogy. Influenced by luminaries like Tanith Lee and (John) Crowley, Harbour delivers an excellent, promising debut novel.”
—Romantic Times Review


“You might...think of Stephanie Meyer’s Twilight a time or two, as a few of the story’s bones are similar, but I never once felt like I was reading Twilight...which goes to show you tropes need not be poison if woven into a good tale.”
—Fantasy Literature


“An intriguing story filled with mystery, enchantment and darkness.”
—A Bookish Escape

“Combining the sorcery of The Night Circus with the malefic suspense of A Secret History...a beguiling fusion of love, fantasy, and myth that echoes the imaginative artistry of the works of Neil Gaiman, Cassandra Clare, and Melissa Marr.”
—Good Books and Good Wine


“. . . crafts an opulent world of masks and mythical beings that is constantly fraught with peril. It’s impossible not to get sucked into her vibrant world as we see fairies both frolicking and plotting while humans fall prey to their whims. . . immerses the reader into an alluring world where nothing is quite as it seems and everyone hides behind a mask of some sort. I didn’t want Thorn Jack to end . . .”
—Fresh Fiction