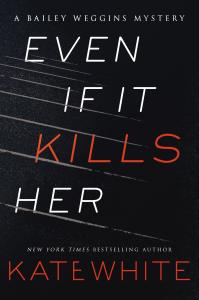 Even If It Kills Her: A Bailey Weggins Mystery

Like many thirty-somethings, Bailey Weggins has a few regrets, some involving her career and others her love life. But running into Jillian Lowe at her book signing, Bailey comes face to face with perhaps her biggest regret to date. For more than ten years, Bailey has felt guilty for not staying in closer communication with Jillian, her college roommate, after Jillian’s family was brutally murdered. Jillian had left their school in the middle of their sophomore year right after the tragedy, leaving Bailey to wonder how her friend’s life turned out.

Bailey is shocked to see Jillian and is even more stunned when her still-gorgeous former roommate approaches her with a case. The man accused of murdering her family has been cleared of the crime through new DNA evidence. With the real killer walking free, Jillian is desperate for Bailey’s help to identify him and finally secure justice for her family. As the two women return to Jillian’s childhood town to investigate, secrets from Jillian’s past begin to surface. And it doesn’t take long before they learn not everyone is happy with their sleuthing—not the local police, not family friends, and certainly not the true killer.

With someone watching their every move, Bailey and Jillian find themselves in grave danger and must decide how much they are willing to risk to finally uncover what happened that terrifying night.