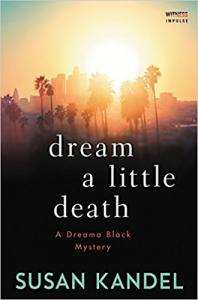 Dreama Black is almost famous. The daughter (and granddaughter) of groupies who captivated L.A.’s biggest rock stars, and muse to her own Grammy-winning ex-boyfriend Luke Cutt, Dreama seems doomed to remain on the periphery of stardom.

All that changes when Dreama is hired by record producer Miles McCoy to arrange an epic wedding celebration for his beautiful fiancée, Maya Duran.  The theme of the party? A noir-style tour through L.A.’s most infamous locations and hidden gems. It seems like Dreama’s big break, until Maya is rushed to the hospital with a self-inflicted bullet wound. The police and everyone involved assume it’s an attempted suicide, but Dreama isn’t convinced. For one thing, how did the weapon just vanish? Why has Maya been using two names? And then there’s the mysterious check for $40,000 that shows up on Dreama’s doorstep—the exact amount of money reportedly laundered by her beloved L.A. police detective uncle, and also the exact amount Miles promised as payment for Dreama’s party-planning services.

Now Dreama is at the center of a mystery worthy of a classic film noir, and must road-trip across L.A. to piece together the clues—before she becomes the next femme fatale.


“[B]reezy, entertaining . . . Brisk prose, a pistol of a protagonist, and nice riffs on Hitch—both biographical and psychological.”
—Booklist


“These saucy, well-crafted mysteries are a lot of fun.”
—Boston Globe