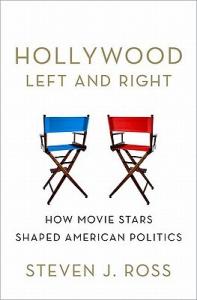 In Hollywood Left and Right, Steven J. Ross tells a story that has escaped public attention: the emergence of Hollywood as a vital center of political life and the important role that movie stars have played in shaping the course of American politics.

Ever since the film industry relocated to Hollywood early in the twentieth century, it has had an outsized influence on American politics. Through compelling larger-than-life figures in American cinema--Charlie Chaplin, Louis B. Mayer, Edward G. Robinson, George Murphy, Ronald Reagan, Harry Belafonte, Jane Fonda, Charlton Heston, Warren Beatty, and Arnold Schwarzenegger--Hollywood Left and Right reveals how the film industry's engagement in politics has been longer, deeper, and more varied than most people would imagine. As shown in alternating chapters, the Left and the Right each gained ascendancy in Tinseltown at different times. From Chaplin, whose movies almost always displayed his leftist convictions, to Schwarzenegger's nearly seamless transition from action blockbusters to the California governor's mansion, Steven J. Ross traces the intersection of Hollywood and political activism from the early twentieth century to the present.

Hollywood Left and Right challenges the commonly held belief that Hollywood has always been a bastion of liberalism. The real story, as Ross shows in this passionate and entertaining work, is far more complicated. First, Hollywood has a longer history of conservatism than liberalism. Second, and most surprising, while the Hollywood Left was usually more vocal and visible, the Right had a greater impact on American political life, capturing a senate seat (Murphy), a governorship (Schwarzenegger), and the ultimate achievement, the Presidency (Reagan).

Reviews:
"... resonant ... corrects the misconception that Hollywood is a beehive of liberalism and parses the divide between idealistic, telegenic charisma and the grit of partisan maneuvering."
—The New York Times Book Review


"Hollywood Left and Right is nonfiction at its best: entertaining and engaging, probing and provocative, detailed and comprehensive in coverage, multifaceted and far-ranging in its treatment, objective and balanced, appropriately paced in covering a complex, big story."
—New York Journal of Books


"Steven J. Ross convincingly shows in Hollywood Left and Right that since its early days, the movie industry has been as quietly conservative as publicly liberal."
—The Los Angeles Times


"In this fascinating study Steven J. Ross shows that Hollywood's impact on American politics has been longer lasting, deeper, and more varied than most people realize. Ross investigates Hollywood's influence by examining five activists on the right side of the political spectrum and five on the left."
—American Historical Review


"Ross does a lot of things well. Each of his chapters offer skillfully limned portraits (Murphy and Reagan, whose careers coincided and interests overlapped, are treated as a pair)... Ross is also a deft analyst. He weaves in close readings of particular films, contextualizing them in their immediate sociopolitical environments."
—History News Network


"As Steven J. Ross reminds us in Hollywood Left and Right, an entertaining history of the nexus between celebrity and politics, Hollywood intervention in politics is as old as the silents... Ross does a creditable job of providing the historical frame for today's political Hollywood. Writing in clear, workmanlike prose, he offers engrossing profiles of each of his subjects. At its best - the heartbreaking chapter on Robinson, the juicier passages on Beatty - the book can be downright revelatory. Indeed, the substance is impressive."
—Los Angeles Review of Books


"Well written, entertaining, and enlightening, this is highly recommended, especially for film buffs interested in the intersection of politics and culture."
—Library Journal


"Steven Ross's engrossing book about the interplay between movie stars, politics and America's celebrity culture definitely lives up to its title. Focusing his tome, Hollywood Left and Right: How Movie Stars Shaped American Politics on 10 of the movie industry's larger-than-life figures from the early 1900s to the present, he makes a convincing case that Hollywood has largely written, and continues to write, the script for modern American politics."
—The Hill


"The stereotype of 'Liberal Hollywood,' always something between a myth and a slur, takes a sustained shellacking in Steven J. Ross' eye-opening history of the relationship between the movie industry and national politics."
—John Patterson, Directors Guild of America


"This is a well-written, solidly researched look at how Hollywood influenced the nation's politics well beyond the election of a former B-movie actor to the White House."
—Robert Nott, Pasatiempo


"A fluent, even-handed account of an often-overlooked or over-simplified aspect of the US movie industry, and one whose lasting influence on politics can be felt today."
—Times Higher Education


"This is the smartest and most thorough investigation of Hollywood's role in American politics I have read, as well the first and only to give the Hollywood Right its due."
—Peter Biskind, author of Easy Riders, Raging Bulls


"Steven J. Ross's Hollywood Left and Right is a deeply researched and well-written exploration of the sometimes bloody crossroads where our celebrity system and our political system intersect. It's a must-read for anyone interested in how opinion has been formed (and sometimes distorted) by the mass media over the last century of American life."
—Richard Schickel, author of Conversations with Scorsese


"Because of such events as the HUAC hearings and the Black List, historians have tended to focus on the leftish side of Hollywood politics. In Hollywood Left and Right, Steven J. Ross brilliantly enlarges and complicates this standard picture to show the actual broad array of individual activists and movements, both liberal and conservative-from Chaplin to Schwarzenegger, Louis B. Mayer to Warren Beatty-that made the movie business such a shaping force in American culture."
—Leo Braudy, author of The Hollywood Sign


"So Hollywood is a coven of fanatical lefties? Steve Ross tells that story with new detail and nuance, but he also meticulously and convincingly conveys the even deeper affinity between conservatism and Hollywood-an affinity that, as he amply shows, has had a far more powerful impact on American politics."
—Neal Gabler, author of Walt Disney


"A benchmark study of the role that Hollywood stars and moguls have played in American politics...Ross' book allows us look behind the curtain and to glimpse the inner workings of the entertainment industry."
—The Jewish Journal


"A major, illuminating, unparalleled treatment of 20th century politics in Hollywood that no reader should miss."
—Choice


"The result is a highly readable text that will undoubtedly appeal to the general public as well as to academics. ... Hollywood Left and Right makes several important contributions to the field of media industry studies. ... The book will provide an excellent starting point for students who want to delve more deeply into issues and individuals."
—Political Science Quarterly