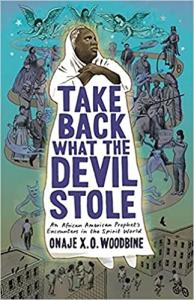 Take Back What the Devil Stole: An African American Prophet's Encounters in the Spirit World

Ms. Donna Haskins is an African American woman who wrestles with structural inequity in the streets of Boston by inhabiting an alternate dimension she refers to as the “spirit realm.” In this other place, she is prepared by the Holy Spirit to challenge the restrictions placed upon Black female bodies in the United States. Growing into her spiritual gifts of astral flight and time travel, Donna meets the spirits of enslaved Africans, conducts spiritual warfare against sexual predators, and tends to the souls of murdered Black children whose ghosts haunt the inner city.

Take Back What the Devil Stole centers Donna’s encounters with the supernatural to offer a powerful narrative of how one woman seeks to reclaim her power from a lifetime of social violence. Both ethnographic and personal, Onaje X. O. Woodbine’s portrait of her spiritual life sheds new light on the complexities of Black women’s religious participation and the lived religion of the dispossessed. Woodbine explores Donna’s religious creativity and her sense of multireligious belonging as she blends together Catholic, Afro-Caribbean, and Black Baptist traditions. Through the gripping story of one local prophet, this book offers a deeply original account of the religious experiences of Black women in contemporary America: their bodies, their haunted landscapes, and their spiritual worlds.


“A stirring ethnography of a Boston woman who claims to have spiritual gifts.”

“Layered, powerful, personal, nuanced, and deeply researched, the book tracks Haskins's violent childhood, her encounter with the Holy Spirit, and her experiences as a traveler in the spirit realms, warring against "the ghosts of American power.’”

“Onaje X. O. Woodbine’s book about a Black woman’s life is a model of ethnographic work that centers the voice of its subject. . . It’s a compelling story because it is simultaneously ordinary and extraordinary.”

“A distinctive blend of reportage, personal memoir, and ethnographic scholarship rendered in elegant prose, the book is not only a fascinating portrait of a resilient person, but an examination of what American society has inflicted on Black women for generations and how they have used religion to get through it.”

"A searing story of the darkness that haunts so many in America’s cities and a needed reminder that Black souls as well as Black bodies are under assault there. But out of the smoke and fire emerges a magical character who just so happens to be real, a victim of all the evils America has to offer who shape-shifts before our eyes into a mystic and prophetess who somehow manages to steal back her own life. Like Karen McCarthy Brown’s Mama Lola: A Vodou Priestess in Brooklyn, this study of an impossibly ordinary life grabs you and refuses to let go, even as it offers new insights into a hidden spiritual world."

--Stephen Prothero, author of Why Liberals Win (Even When They Lose Elections): How America's Raucous, Nasty, and Mean "Culture Wars" Make for a More Inclusive Nation

“Along with its moving prose, the greatest strength of Take Back What the Devil Stole is how successful it is at achieving the author’s goal of telling a story from its subject’s perspective.”