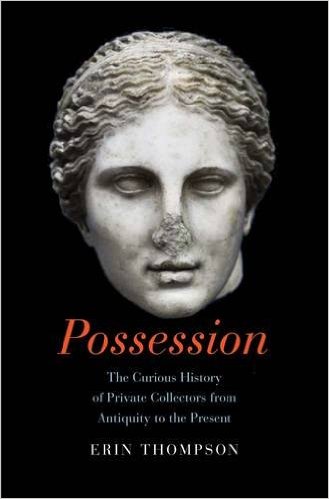 Possession: The Curious History of Private Collectors from Antiquity to the Present

Whether it's the discovery of $1.6 billion in Nazi-looted art or the news that Syrian rebels are looting UNESCO archaeological sites to buy arms, art crime commands headlines. Erin Thompson, America's only professor of art crime, explores the dark history of looting, smuggling, and forgery that lies at the heart of many private art collections and many of the world's most renowned museums.

Enlivened by fascinating personalities and scandalous events, Possession shows how collecting antiquities has been a way of creating identity, informed by a desire to annex the past while providing an illicit thrill along the way. Thompson's accounts of history's most infamous collectorsfrom the Roman Emperor Tiberius, who stole a life-sized nude Greek statue for his bedroom, to Queen Christina of Sweden, who habitually pilfered small antiquities from her fellow aristocrats, to Sir William Hamilton, who forced his mistress to enact poses from his collection of Greek vasesare as mesmerizing as they are revealing.

Reviews:
"'Collecting is a curious behavior.' With this unassailable thesis, Erin L. Thompson begins her riveting investigation of 'The Curious History of Private Collectors from Antiquity to the Present.' Fascinating...'Possession' is more than an antiquarian romp."
—Wall Street Journal


“Timely and immensely enjoyable. [Possession is ] a cavalcade of history’s most ardent lovers of the antique…Thompson’s brilliantly told tales create a sparkling tableau that invites further reflection on the politics of even the most solipsistic collectors.”
—The Atlantic


“This slim volume is bursting with read-them-to-a-friend anecdotes of collectors who’d stop at nothing…the marvelous Possession offers a savvy history of passion as politics, a delightful collection of collectors, and a love of art that might just send you to a museum.”
—NPR


“In her insightful history of the private collectors of Greek and Roman antiquity, [Erin Thompson] explores how collectors’ desires dramatically changed the fate of antiquities, altering their sex, identity and meaning. Possession is an informed investigation that delves deeper than the usual studies. [A] vivid history of the passions of collectors of the past.”
—Literary Review


"[A] fine and entertaining account of the peccadilloes and object-fetishes of a few grandees..."
—Times Literary Supplement


“With elan and insight, Erin Thompson delves into the fascinating history of the human obsession to personally own physical relics of the past. Possession illuminates the complex psychological and social motives that drive individuals to collect antiquities, from ancient Roman emperors and Renaissance popes to modern connoisseurs and today's looters (and destroyers) of archaeological treasures.”
—Adrienne Mayor, author of The Amazons and The Poison King


"Erin Thompson advances the study of the art world by taking on the hard work: the examination of the motives behind those who take the leap into the world of collecting. Possession is an essential study of collecting throughout the ages, whether the art be precious or illicit, by a leading scholar in the field."
—Anthony M. Amore, author of The Art of the Con and Stealing Rembrandts


“Erin Thompson’s fascinating book plumbs the myriad motivations of private collectors of Greek and Roman antiquities, arguing that their drive to possess the past amounts to more than mere vanity. The subject has been largely overlooked. What she finds will surprise many.”
—Jason Felch, co-author of Chasing Aphrodite: The Hunt for Looted Antiquities at the World’s Richest Museum