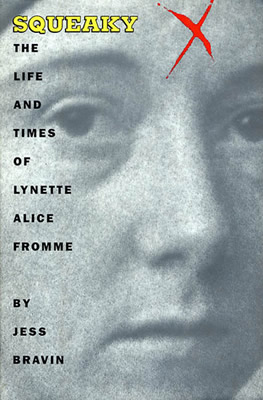 Squeaky: The Life and Times Of Lynette Alice Fromme

In the early 1950s, Lynette Fromme's world was more or less a paint-by-numbers existence that millions of other suburban children were living in Southern California. Red-haired, freckled, and convivial, she was the child of an in absentia workaholic father and a reclusive mother. She sang in the school choir and her dance troupe performed before President Eisenhower. As a young teenager she wrote forlorn poetry. Beyond her neighborhood, the counter-culture of Los Angeles was thriving. Lynette began getting interested in, then became attracted to, the freedoms of that world. Little by little, she began losing her way.... That day on the beach marked Lynette's introduction to the world of shade. Charles Manson, freshly released from prison, became her guide to illegal drugs and social outcasts. Over the course of a decade, Lynette would change until she found herself imprisoned for the term of her natural life in the custody of the Attorney General of the United States for attempting to assassinate then-president Gerald Ford. Meticulously researched for over three and a half years, with hundreds of interviews and thousands of pages of testimony to review, in Squeaky author Jess Bravin has created a psychosocial masterpiece of one American girl who ran away, and ran too far.

Reviews:
"[Bravin] has done his research thoroughly, capturing the texture of an era and Fromme's journey."
—Library Journal


"Bravin's disturbing but fascinating effort is significant for its new perspective on the Manson phenomenon. As either cautionary tale or gruesome pleasure reading, it should satisfy thrill seekers, Manson obsessives, and other portions of the true-crime audience."
—Booklist