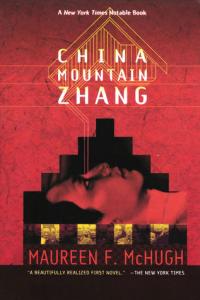 With this groundbreaking novel, Maureen F. McHugh established herself as one of the decade's best science fiction writers. In its pages, we enter a postrevolution America, moving from the hyperurbanized eastern seaboard to the Arctic bleakness of Baffin Island; from the new Imperial City to an agricultural commune on Mars. The overlapping lives of cyberkite fliers, lonely colonists, illicit neural-pressball players, and organic engineers blend into a powerful, taut story of a young man's journey of discovery. This is a macroscopic world of microscopic intensity, one of the most brilliant visions of modern SF.


Winner of the James Tiptree, Jr. Memorial Award, the Lambda Literary Award, the Locus Award for Best First Novel, and a Hugo and Nebula Award nominee.

Reviews:
“A first novel this good gives every reader a chance to share in the pleasure of discovery; to my mind, Ms. McHugh's achievement recalls the best work of Delany and Robinson without being in the least derivative.”
—The New York Times


“It's a rare writer who produces a novel this good....I can't think of a book that offers a more lived-in future. The people are impulsive, changeable, and very real. Lovers of fine fiction, SF, and otherwise, will treasure this deeply humane book. Five stars.”
—Minneapolis Star-Tribune