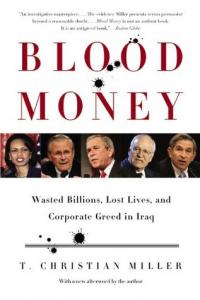 It was supposed to be quick, easy, and cheap: the Bush administration promised American taxpayers that Iraqi oil revenues would pay for it all. But thousands of lives and billions of dollars later, the Iraqi reconstruction is an undeniable failure, overrun by staggering corruption, waste, and incompetence. In Blood Money, "top-flight investigative reporter" (Mother Jones) T. Christian Miller reveals how the Bush administration failed to keep its promises and allowed a nation to tumble into chaos. Widely hailed as one of the most important books about the quagmire, Blood Money is essential reading for anyone who cares about the fate of Iraq, and about America's place in the world.


Named a best nonfiction title of 2006 by Washington Post

Named a best book of 2006 by Kirkus Reviews

Reviews:
“Indespensable…Miller fills in the missing piece: the staggering incompetence and corruption of the U.S.-led reconstruction effort….Blood Money provides the best account yet of the pitfalls of contracting security out to private companies.”
—Washington Post


“A damning indictment of an administration’s hubris and complacency.”
—San Francisco Chronicle


“Searing….Readers interested in understanding the political and economic dynamics behind the faltering campaign in Iraq will appreciate this investigation of the money trail between Iraq and Washington, DC.”
—Booklist


“Fills in the missing piece of the Iraq puzzle: the incompetence and corruption of the U.S. led reconstruction effort, which may have done almost as much as anything else to turn the Iraqi population against its occupiers.”
—Washington Post


“An investigative materpiece….The evidence Miller presents seems persuasive beyond a reasonable doubt….Blood Money is not an antiwar book. It is an antigreed book.”
—Boston Globe