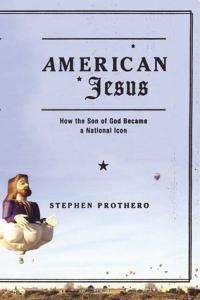 American Jesus: How The Son Of God Became A National Icon

Jesus the Black Messiah; Jesus the Jew; Jesus the Hindu sage; Jesus the Haight-Asbury hippie: these Jesuses join the traditional figure of Jesus Christ in American Jesus, which was acclaimed upon publication in hardcover as an altogether fresh exploration of American history--and as the liveliest book about Jesus to appear in English in years.

Our nation's changing images of Jesus, Stephen Prothero contends, are a kind of looking class into the national character. Even as most Christian believers cleave to a traditional faith, other people give Jesus a leading role as folk hero, pitchman, and countercultural icon. And so it has been since the nation's founding--from Thomas Jefferson, who took scissors to his New Testament to sort out true from false Jesus material; to the Jews, Buddhists and Muslims who fit Jesus into their own traditions; to the people who adapt Jesus for stage and screen and the Holy Land theme park. American Jesus is "a lively, illuminating and accessible survey that takes us into unexpected corners of our shared religious heritage" (Dan Cryer, Newsday).

Reviews:
“…enormous fun.  It is well written, and offers a host of insights even on topics that the reader might think are thoroughly familiar…he ranges widely and entertainingly over the past two centuries…All Prothero’s discussions are valuable in their own right, and I will definitely use this provocative book as a text in classes on modern Christianity.”
—Books & Culture


“Stephen Prothero…has written a cultural history of Jesus as American image and icon…in vivid, engrossing detail…within his narrative, ostensibly a popular and often entertaining account of the rendering of Jesus in song, story and spirituality, he has embedded a fairly detailed history of American religion itself – one, of the subtle achievements of ‘American Jesus.’”
—New York Times


“This wide-ranging history traces a dual evolution: of American religion (not only Christianity but Judaism, Hinduism, and Buddhism) in terms of its relationship to Jesus; and of his multiform manifestations in response to changing cultural currents.”
—The New Yorker


“In American Jesus: How the Son of God Became a National Icon, Prothero…mines not only sermons and theological tracts but also novels, biographies, songs, films, the press and the visual arts to ‘see how Americans of all stripes have cast the man from Nazareth in their own image’ and so ‘to examine, through the looking glass, the kaleidoscopic character of American culture’…’American Jesus’ is well written, judiciously argued and impressively researched…As Prothero suggests, it’s not just Christians who have embraced Jesus. Prothero offers a fascinating account of the uproar set off by and address delivered by Rabbi Stephen S. Wise at Carnegie Hall in 1925.”
—New York Times Book Review


“…Stephen Prothero’s splendid history of Jesus in American culture…Prothero conducts his quest for the American Jesus with broad and imaginative research, and reports his findings in a lucid and lively prose that will appeal outside the academy… Prothero offers a generous and often witty panoramic view…Prothero deserves thanks.”
—Chicago Tribune


“As Boston University historian Prothero demonstrates in this sparkling and engrossing book, Jesus is the one religious figure nearly every American, whether Christian or not, past and present, has embraced. Nearly every page offers a fresh portrait of some corner of American religious history…Stephen Prothero sweeps over the whole American understanding of Jesus Christ in the ambitious cultural history American Jesus: How the Son of God Became a National Icon."
—Publisher's Weekly