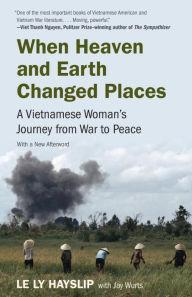 When Heaven & Earth Changed Places: A Vietnamese Woman's Journey from War to Peace

In these pages, Le Ly Hayslip—just twelve years old when U.S. helicopters landed in her tiny village of Ky La—shows us the Vietnam War as she lived it. Initially pressed into service by the Vietcong, Le Ly was captured and imprisoned by government forces. She found sanctuary at last with an American contractor and ultimately fled to the United States. Almost twenty years after her escape, Le Ly found herself inexorably drawn back to the devastated country and loved ones she’d left behind, and returned to Vietnam in 1986. Scenes of this joyous reunion are interwoven with the brutal war years, creating an extraordinary portrait of the nation, then and now—and of one courageous woman who held fast to her faith in humanity.

First published in 1989, When Heaven and Earth Changed Places was hailed as an instant classic. Now, some two decades later, this indispensable memoir continues to be one of our most important accounts of a conflict we must never forget.

Reviews:
“One of the most important books of Vietnamese American and Vietnam War literature.... Moving, powerful.”
—Viet Thanh Nguyen, Pulitzer Prize–winning author of The Sympathizer


“A wonderful, wondrous book by a remarkable woman.”
—Amy Tan, author of The Valley of Amazement


"Should not be missed by anyone...No one who reads iti will ever be able to think about the Vietnam War in quite the same way again."
—Washington Post


"Riveting and historic...engrossing and beautifully told...impossible to put down."
—San Francisco Chronicle