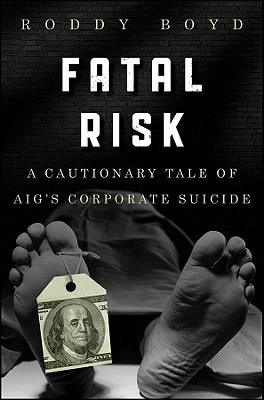 The true story of how risk destroys, as told through the ongoing saga of AIG

From the collapse of Bear Stearns and Lehman Brothers, the subject of the financial crisis has been well covered. However, the story central to the crisis-that of AIG-has until now remained largely untold. Fatal Risk: A Cautionary Tale of AIG's Corporate Suicide tells the inside story of what really went on inside AIG that caused it to choke on risk and nearly brining down the entire economic system. The book:

-Reveals inside information available nowhere else, including the personal notes and records of key players such as the former Chairman of AIG, Hank Greenberg
-Takes readers behind the scenes at the U.S. Treasury and the Federal Reserve Bank of New York
-Details how an understanding of risk built AIG, but a disdain for government regulators led to a run-in with New York State Attorney General Eliot Spitzer

Fatal Risk is the comprehensive and compelling true story of the company at the center of the financial storm and how it nearly caused the entire economic system to collapse.

Reviews:
"A vivid portrait of the giant insurer at the center of the 2008 financial crisis."
—Wall Street Journal


"A sober work that appears to have been researched extremely thoroughly. . . more convincing on the mechanics of AIG's Suicide than it is on any of the deeper motivations."
—Financial Times


"Through superb reporting, Boyd has written one of the financial crisis genre's most important works."
—Bloomberg BusinessWeek


"As Roddy Boyd demonstrates in his well-written study of AIG's fall, it was the very solidity of the company's credit rating that led it astray."
—The Economist


"Engaging and balanced account . . . Many books on the financial meltdown that began in 2007 treat AIG as a plot point in a wider drama. Yet valuable lessons can be gleaned from the narrower account that Boyd lays out here -- lessons about the responsibilities of leaders and regulators as well as the hazards of financial engineering. . . The story of AIG's demise has many moving pieces, large and small, which Boyd meshes into a smooth narrative. . . Boyd is good with dialogue and knows how to keep the story going. His reporting is thorough and fair, even when it comes to Timothy F. Geithner's risible assertions that it wasn't the Federal Reserve's job to pop bubbles."
—Bloomberg


The best book on the financial crisis, and . . . favorite piece of non-fiction work since Michael Lewis' The Big Short. . . The reporting here is incredible."
—Distressed Debt Investing