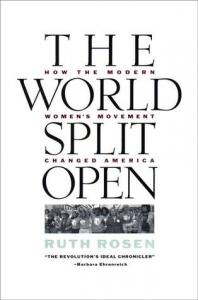 Some revolutions are hard to recognize: no cataclysms mark their beginnings or ends, no casualties are left lying in pools of blood. Though people may suffer, their pain is hidden from public view. Such was the case with the modern women's movement.

In her extraordinary new work, Ruth Rosen takes the reader on an unforgettable journey through the last half of the twentieth century, charting the accomplishments and failures of a movement that transformed our politics, our culture, and our lives. The World Split Open evokes a "you are there" sense of the past. Suddenly, the years roll back, and the reader experiences the stigma faced by early pioneers, the heady nights of sexual adventure, the angry days of protest, the early euphoria of sisterhood, the bitter pain of betrayal. Here are the famous and unknown women whose collective outrage, indignant protests, zany humor, and gritty determination forced Americans to rethink what kind of society we would want-if women really mattered.

The World Split Open debunks media-generated myths and surprises the reader with stories from a freshly excavated past. Feminists never burned their bras but were haunted by aprons; African American women supported the movement more than their white counterparts; the FBI hired hundreds of women to infiltrate the women's movement; and, despite the media's repeated announcement of the death of the women's movement, feminism actually proliferated and burrowed deeply into American culture.

Weaving together ten years of archival research and interviews, Rosen turns the complicated history of the women's movement into a compelling and coherent narrative. Written with vigor and grace, she has created the balanced, meticulously documented, and evocative history that we expect from a distinguished scholar and activist. With uncompromising integrity, The World Split Open challenges us to understand how the women's movement has forever altered our lives and why the revolution is far from over. This is extraordinary achievement and long awaited history will attract men and women, entice educators and students, beguile movement veterans, and captivate those who came of age in the wake of this revolution.

Reviews:
"With evocative quotations her pages recreate...the tremendous highs of women discovering what women could do and be… Rosen highlights sex and drive home the point that women's liberation crystallized around 'the hidden injuries of sex.' This lively history offers much to learn and ponder"
—The Boston Globe


"...enlightening [and] entertaining for all the rest of us whom the big bad news media have been busily conspiring to dupe."
—New York Times Book Review


"Comprehensively researched and exquisitely written, Ruth Rosen's history of the women's movement gives us a compelling account of key changes in American society since 1945. Destined to become a classic for teachers and students of U.S. history, her book is essential reading for anyone seeking to understand the changing relations between women and men in the second half of the twentieth century."
—Kathryn Kish Sklar, Distinguished Professor of History, SUNY Binghamton, and author of award-winning biographies of Catherine Beecher and Florence Kelley.


"If you think the story of American feminism has already been told before, think again. With passion and insight, Ruth Rosen follows the movement from its beginnings in consciousness-raising groups and demonstrations into the heart of American culture, revealing a revolution so profound and wide-reaching that we too often take its victories for granted. She demonstrates how feminist revolts changed America and the world-women and men, family life, political culture, the workplace and the labor movement, social theory and the academy, you name it. We can never go back to the way things were, which is why the current backlash is so fierce. But if we want to go forward the feminist vision so powerfully laid out in this book must be our guide."
—Robin D. G. Kelley, Professor of History, NYU, Author of Race Rebels: Culture, Politics, and the Black Working Class


"In this brilliant history of recent decades in the feminist movement, Rosen gives us views both panoramic and close up, authoritative and lively. What was once called 'the slowest revolution,' she shows, has actually come fast and furious. She reviews our triumphs, our mistakes, and the vision we need for the years ahead. This is must reading for those who've been in the thick of it, those who've gritted their teeth through it, and those who've done neither."
—Arlie Russell Hochschild is the author of The Second Shift and The Time Bind, and the Director of the Center for Working Families at University of California, Berkeley


"Ruth Rosen has given us a study not of abstractions but of real people brought compellingly to life in the pages of her probing, illuminating, engagingly-written history of the modern women's movement, its culture, and its legacy."
—Lawrence W. Levine, author of The Opening of the American Mind


"The World Split Open is indeed the history of a movement, [but] not simply of its high-profile leaders; Rosen consistenly links feminism's development and failures to the larger social and economic forces that determined the lives of women. Written in clear, engaging prose, and excellently researched, The World Split Open is destined to become a canonical work in college-level women's studies courses throughout the country.
—Los Angeles Time Book Review