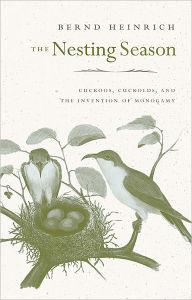 The Nesting Season: Cuckoos, Cuckolds, and the Invention of Monogamy

Why are the eggs of the marsh wren deep brown, the winter wren's nearly white, and the gray catbird's a brilliant blue? And what in the DNA of a penduline tit makes the male weave a domed nest of fibers and the female line it with feathers, while the bird-of-paradise male builds no nest at all, and his bower-bird counterpart constructs an elaborate dwelling?

These are typical questions that Bernd Heinrich pursues in the engaging style we've come to expect from him--supplemented here with his own stunning photographs and original watercolors. One of the world's great naturalists and nature writers, Heinrich shows us how the sensual beauty of birds can open our eyes to a hidden evolutionary process. Nesting, as Heinrich explores it here, encompasses what fascinates us most about birds--from their delightful songs and spectacular displays to their varied eggs and colorful plumage; from their sex roles and mating rituals to nest parasitism, infanticide, and predation.

What moves birds to mate and parent their young in so many different ways is what interests Heinrich--and his insights into the nesting behavior of birds has more than a little to say about our own.


"Blending scientific research with memoir, Heinrich (A Year in the Maine Woods) reveals the complex courtship and mating rituals of birds—along with the startling commonalities between certain human and avian domestic arrangements. … Skillfully narrated and illustrated by the author’s own photographs and watercolor sketches, this book offers a range of intellectual and aesthetic pleasures.”
—Publisher's Weekly