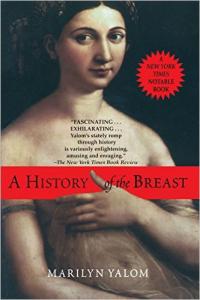 A History of the Breast

A fascinating, astute, and richly allusive journey from Paleolithic goddesses to modern day feminists, A History of the Breast is full of insight and surprises. As Yalom says, "I intend to make you think about women's breasts as you never have before." In this, she succeeds brilliantly.

Reviews:
"With wit and dispassionate scholarship, Stanford researcher and feminist scholar Yalom decodes the social constructions of the breast as political symbol of liberty in the French Revolution, idealized domestic comforter in the Dutch golden age, modern advertising commodity and source of titillation in the arts, entertainment, erotica and pornography... Intriguingly and amply illustrated with reproductions of paintings, sculpture, prints, posters, ads and photographs, this enlightening, often surprising cultural history will compel men and women to think differently about the breast."
—Publisher's Weekly

"Yalom, a senior scholar at the Institute for Women and Gender at Stanford University... presents a unique analysis of the role that the human female breast has played throughout Western history... Highly recommended for all women's studies collections, as well as collections supporting the social sciences and history."
—Library Journal

"[Marilyn Yalom's] newest book, a work of spectacular cultural scope and pleasing fluency, is unprecedented in its subject matter and unusually successful in its blending of the aesthetic with the political."
—Booklist (starred)