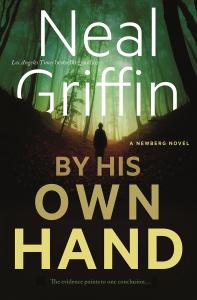 By His Own Hand: A Newberg Novel

Neal Griffin returns with a chilling tale of religion, racism, and murder in small-town America.

Former Marine Tia Suarez has made a name for herself in the Newberg PD: troublemaker, seeker of justice, a good cop's best friend and a bad cop's worst nightmare. When a Native American teen is found dead on the grounds of a Christian religious retreat, Tia is determined to find out who killed him despite being stonewalled by all involved.

Reviews:
"Engrossing...Griffin, a 25-year law enforcement veteran, paints a vivid picture of the difficulties of police work, in particular the harassment Tia endures from her male colleagues on account of her gender."
—Publisher's Weekly


“Detective Tia Suarez is everything I love in a heroine: brash, persistent, and smart as a whip.  Add Neal Griffin to your list of must-read crime writers!”
—Tess Gerritsen, author of the Rizzoli and Isles series