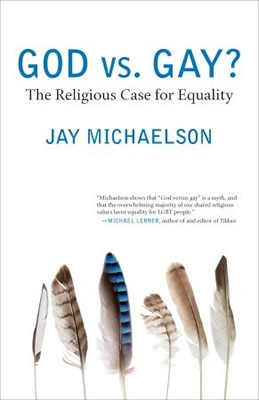 God vs. Gay?: The Religious Case for Equality

The myth that the Bible forbids homosexuality, the myth of "God versus Gay", is behind some of the most divisive and painful conflicts of our day. In this provocative, passionately argued, and game-changing book, scholar and activist Jay Michaelson shows that not only does the Bible not prohibit same-sex intimacy, but the vast majority of its teachings support the full equality and dignity of gay and lesbian people, from the first flaw it finds in its creation ("It is not good for a person to be alone") to the way religious communities grow through reflection and conscience. In short, Michaelson observes, religious people should support equality for gays and lesbians, not despite their religion, but because of it.

With close readings of the Hebrew Bible and New Testament, the latest data on the science of sexual orientation, and a sympathetic accessible, and ecumenical approach to religious faith, Michaelson makes the case that sexual diversity is part of the beauty of nature and that the recognition of same-sex families will strengthen, not threaten, the values religious people hold dear. This is an important book for anyone who has wrestled with questions of religion and homosexuality: parents and pastors, believers and skeptics, advocates of "gay rights" and opponents of them. Whatever your views on religion and sexual diversity, God vs. Gay? is a plea for more compassionate, informed conversation, and a first step toward creating one.

Reviews:
“The first part’s insistence that Judeo-Christian values require gay equality is so confidently and cogently asserted that it amounts to something new and invigorating in gay religious apologetics.”
—Booklist


“God vs. Gay is an excellent resource for those struggling to reconcile their sexual feelings — or those of a loved one — with being a person of devout religious faith. Michaelson never panders, attempts to set aside all biases and simply lets the text speak for itself. What happens when he clears the smoke of punditry and bigotry is a beautiful thing, and the discussion over equality and human diversity is elevated because of Michaelson’s willingness to have faith in the words of the Torah — and in human dignity.”
—NewVoices.org


“Mixing memoir and academic analysis in this well-researched and concisely written treatise, Michaelson embarks on a mission to reconcile sexuality with Judeo-Christian religious traditions… Inclusive and modern theology that will give both Jewish and Christian readers a reason to celebrate sexual diversity.”
—Kirkus Reviews


“This title is very much worth reading and particularly useful for those interested in religion, civil rights, and social progress.”
—Library Journal


"Michaelson looks at the Hebrew and Christian Bible with keen intellect, wit, and often surprising insights. He roots his arguments not in dry exegesis but in hard-won self-acceptance and passionate concern for others. I highly recommended God vs. Gay? for anyone seeking to understand how being homosexual and religious are not antithetical."
—Joe Perez, author of Soulfully Gay


"'The irony of God versus Gay is that actually Gay and God go together.  Opening to one leads to the other.'  So writes Jay Michaelson in the postscript to this beautiful, soulful book.  Michaelson charts a journey from rejection to full acceptance, from religious alienation to spiritual wholeness that will brings the reader closer to the Divine. It did for me and it will for anyone who has felt abandoned by their faith and rejected for who they are. This is a healing book that yearns to be read."
—Sharon Groves, Director, Religion and Faith Program, Human Rights Campaign Foundation


“God vs. Gay? is a timely and important book in this religious and political moment. Michaelson’s book prepares us, regardless of religious or sexual identity, to delve deeper into our souls, our traditions, and into the truth that religion is in fact a source of liberation.”
—Rabbi Sharon Kleinbaum, Senior Rabbi of Congregation Beit Simchat Torah, the largest gay and lesbian synagogue in the world


“Through careful discussions of Jewish and Christian teachings on homosexuality Michaelson masterfully reveals that both religions allow for the full embrace of LGBT persons. This religious-ethical work is illuminating and a must read for anyone who wants to understand the current debate over religion and homosexuality.”
—Rabbi David Ellenson, President Hebrew Union College-Jewish Institute of Religion


“Michaelson shows that ‘God versus gay’ is a myth and that the overwhelming majority of our shared religious values favor equality for LGBT people.”
—Michael Lerner, editor of Tikkun


"God vs. Gay? is essential reading for people of all faiths who want to be allies of our gay and lesbian brothers and sisters. This book articulates what many of us have felt in our hearts for a long time: that our religious conscience compels us to support equality, not oppose it."
—Rabbi Zalman Schachter-Shalomi, co-author of Jewish with Feeling and From Age-ing to Sage-ing, Blessings for Health, Peace of Mind, and Prosperity