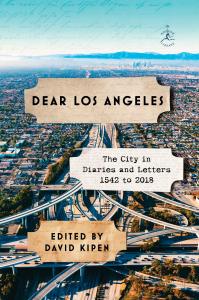 A rich mosaic of diary entries and letters from Marilyn Monroe, Cesar Chavez, Susan Sontag, Albert Einstein, and many more, this is the story of Los Angeles as told by locals, transplants, and some just passing through.

David Kipen scoured the archives of libraries, historical societies, and private estates to assemble a kaleidoscopic view of Los Angeles from the Spanish missionary expeditions in the 1500s to the present day. These entries are arranged by date--January 1 through December 31--but are selected from more than three centuries of writing by those living in, or visiting, Los Angeles. Thus the entry for January 21, for example, will have an excerpt from Benjamin Hayes in 1850, F. Scott Fitzgerald in 1938, Charlton Heston in 1957, John Lennon in 1974, and a blogger in 2011. In the process, readers get a wonderful glimpse of life in this city through the ages.

Profound, historical, whimsical, this rich mix of letters and diary entries marking each day of the year offers intimate flashes of life in Los Angeles over the past four centuries.

Reviews:
"A number of the fragments in Dear Los Angeles are master classes in micro-storytelling...Each [snapshot] gains iridescence by rubbing shoulders with the rest in the calendrical procession of partial portraits...The something that emerges is intangible, irreducible, unexplainable, but it is there, like a ghost, a memory, lingering. The something that emerges is the impossible city itself — or at least its trace, which begins to grow clearer as we read Dear Los Angeles. Yet it always, inevitably remains just out of reach: the haze on the horizon — a city perpetually disappearing, disappeared.”
—Los Angeles Times


"More than four centuries of diary entries and letters paint a dynamic portrait of the town...."
—Vanity Fair


"The love-hate relationship between L.A. and its inhabitants comes alive in this scintillating collection of letters and diary entries....Readers fascinated by the town will find an engrossing trove of colorful, witty insights here."
—Publisher's Weekly (starred)


“This book’s a brilliant constellation, spread out over a few centuries and five thousand square miles. Each tiny entry pins the reality of the great unreal city of Angels to a moment in human time – moments enthralled, appalled, jubilant, suffering, gossiping or bragging – and it turns out, there’s no better way to paint a picture of the place.”
—Jonathan Lethem


"Dear Los Angeles is a fragmentary portrait of an elusive metropolis that is nevertheless oddly compelling."
—Financial Times