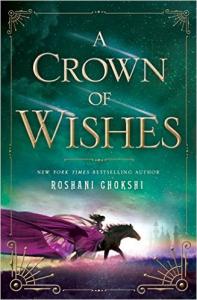 A Crown of Wishes

Gauri, the princess of Bharata, has been taken as a prisoner of war by her kingdom’s enemies. Faced with a future of exile and scorn, Gauri has nothing left to lose. Hope unexpectedly comes in the form of Vikram, the cunning prince of a neighboring land and her sworn enemy kingdom. Unsatisfied with becoming a mere puppet king, Vikram offers Gauri a chance to win back her kingdom in exchange for her battle prowess. Together, they’ll have to set aside their differences and team up to win the Tournament of Wishes – a competition held in a mythical city where the Lord of Wealth promises a wish to the victor.

Reaching the tournament is just the beginning. Once they arrive, danger takes on new shapes: poisonous courtesans and mischievous story birds, a feast of fears and twisted fairy revels.

Every which way they turn new trials will test their wit and strength. But what Gauri and Vikram will soon discover is that there’s nothing more dangerous than what they most desire.


Indie Next Pick for the Spring 2017 Kids' Indie Next List.

Reviews:
"Gauri is a ruthless, calculating heroine who negotiates her femininity and perceived weaknesses as adeptly as she handles her swords and battle strategies. Vikram is a perfect contrast; his measured cunning is tempered by his introspection and optimism. All of the characters grasp for freedom and autonomy as they question what power and choice really mean. The lush language and vibrant imagery combine beautifully to evoke the book’s elements of magic and legend. This is a novel about fierce want, unmet potential, magic, forged alliances, and the power of story. VERDICT: Careful plotting, multiple viewpoints, high-stakes action, and a slow-burn relationship make this heady fantasy completely engrossing. A first pick for YA collections."
—School Library Journal (starred)


"Set in the same Indian-inflected fantasy world as The Star-Touched Queen, Chokshi's sophomore effort examines fear, desire, and ambition as three protagonists compete in the Tournament of Wishes. The most compelling of these characters is Aasha, a vishakanya curious about the human life she left behind when she received the Blessing and became a poisonous courtesan. Her subplot is a beautiful exploration of vengeance and healing. It is here that the worldbuilding is most nuanced and deftly woven...Alaka, the otherworldly Kingdom of Desire where the tournament takes place, is full of wondrous creatures and deities from Indian mythologies...With a happily-ever-after reminiscent of beloved fairy tales, this is a great pick for voracious readers who like their bejeweled princesses to have hard edges."
—Kirkus Reviews


"Chokshi's debut, The Star-Touched Queen (2016), was lush and gorgeously written, and Chokshi has only improved; this lovely companion tale boasts a stronger narrative structure in addition to the delightful prose. Chokshi's characters are dreamers at heart, longing for magic in a world where they don't expect to find it. Fans of Mayavati's story will find Vikram and Gauri to be worthy successors."
—Booklist


"Chokshi revives the luscious and strange setting of Alaka from The Star-Touched Queen, pulling in further elements of Indian folklore for creatures both charming and terrifying, such as the poisonous vishakanyas and the beastly vanaras of the Night Bazaar. Set against this vivid backdrop is a story with two skill- fully drawn protagonists: Vikram’s cunning matches Gauri’s fearsomeness to make some serious crackling chemistry, but the two are just as interesting individually as they are together. Knowledge of the previous book is helpful but not necessary, and this gem will likely send those new to Alaka back to the companion story as its fans wait for another invitation to Chokshi’s luminous world."
—The Bulletin of the Center for Children's Books ?