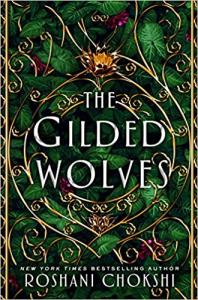 Set in a darkly glamorous world The Gilded Wolves is full of mystery, decadence and dangerous but thrilling adventure.

Paris, 1889: The world is on the cusp of industry and power, and the Exposition Universelle has breathed new life into the streets and dredged up ancient secrets. In this city, no one keeps tabs on secrets better than treasure-hunter and wealthy hotelier, Séverin Montagnet-Alarie. But when the all-powerful society, the Order of Babel, seeks him out for help, Séverin is offered a treasure that he never imagined: his true inheritance. To find the ancient artifact the Order seeks, Séverin will need help from his crew:

An engineer with a debt to pay.

A historian who can't yet go home.

A dancer with no identity.

A brother in all but blood, who might care too much.

Together, they'll have to use their wits and knowledge to find the artifact through the dark and glittering heart of Paris. What they find might change the world, but only if they can stay alive.

Reviews:
"Reading Chokshi's prose is like sinking deeply into the overstuffed arms of a plush, purple velvet sofa. Her lavish descriptions of extravagant dinner parties, furtive meetings and daring escapes wrap you in sumptuous sensory detail. When the time comes to sit up, it can be difficult to extricate yourself from the sheer number of plot twists, political machinations and costumed dinner guests. Still, in spite of the gilding, this ingenious take on colonialism and cultural appropriation is wildly inventive and widely representative."
—New York Times Book Review

“There can be no doubt that Chokshi has grown as a writer with each book, and The Gilded Wolves takes us to a new level of intrigue.”
—NPR.org

"Chokshi delivers a thrilling, gritty new fantasy set in an alternate nineteenth century Paris, where old secrets and even older magic reside...Chokshi shines as a master storyteller in her newest novel; the setting, world building, plot, and conflict are all staggering. However, the elements that perhaps shine the most are the history, riddles, mysteries, and science, woven together in a world brimming with power and magic."
—Booklist (starred)

"[A] spellbinding series opener...Kaleidoscopic narration complements the intricate, high-stakes plot and allows Chokshi to showcase numerous aspects of her richly imagined universe all the way to the closing cliff-hanger."
—Publisher's Weekly (starred)

"This series starter is a sumptuous historical fantasy that perfectly evokes the luxury and unrest of Belle Époque Paris alongside a carefully detailed world where Babel fragments allow Forgers to create wonders...Chokshi has created an inclusive and authentic cast with obvious chemistry and affection for one another and infuses the tale with witty banter and twists...A ­delectably intriguing adventure for all teen shelves."
—School Library Journal (starred)

""The Gilded Wolves sets up a fantastical great heist with a series of clues and problems the well-developed, diverse group of teens must decipher. Chokshi's world is lush and her characters distinct and engaging—this first in a new series is as sharp and lustrous as the title suggests."
—Shelf Awareness