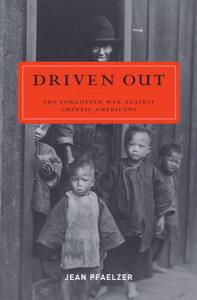 Driven Out: The Forgotten War Against Chinese Americans

Driven Out exposes a shocking story of ethnic cleansing in California and the Pacific Northwest when the first Chinese Americans were rounded up and purged from more than three hundred communities by lawless citizens and duplicitous politicians. From 1848 into the twentieth century, Chinatowns burned across the West as Chinese miners and merchants, lumberjacks and fieldworkers, prostitutes and merchants' wives were violently loaded onto railroad cars or steamers, marched out of town, or killed.

But the Chinese fought back—with arms, strikes, and lawsuits and by flatly refusing to leave. When red posters appeared on barns and windows across the United States urging the Chinese to refuse to carry photo identity cards, more than one hundred thousand joined the largest mass civil disobedience to date in the United States. The first Chinese Americans were marched out and starved out. But even facing brutal pogroms, they stood up for their civil rights. This is a story that defines us as a nation and marks our humanity.

Reviews:
“Pfaelzer gives an in-depth account of the first 'race war' that took place in California and the Pacific Northwest between the Gold Rush and the turn of the 20th century....Since its release in May, Driven Out has won book awards from the New York Times Book Review, The Chronicle and Choice magazine, among others.”
—San Francisco Chronicle


“Driven Out is a sober account of immigration, race and violence. The passionate anti-Chinese sentiment captured in its pages does not reflect a temporary, episodic, or localized spike of intolerance that can be easily dismissed. Rather, Pfaelzer’s focus on the “litany of hate” directed against the Chinese portrays it as a deep-seated and widespread phenomenon, one that was central to the forging of an American identity in the 19th Century.”
—Chicago Tribune


“The events related are deeply disturbing, but Pfaelzer, who is a professor of East Asian studies, handles her material skillfully, bringing to life a vast cast of characters and creating a narrative that’s both compelling and accessible.”
—The Christian Science Monitor


“Pfaelzer’s research is scrupulous and extensive…. Her recounting of specific names and circumstances not only makes her descriptions more vivid, it has the effect of bearing historical witness.”
—The Seattle Times


“[A] comprehensive account of these events.  The expulsion of the Chinese is recorded encyclopedically in “Driven Out,” with many towns earning their time in Pfaelzer’s harsh spotlight.”
—Washington Post