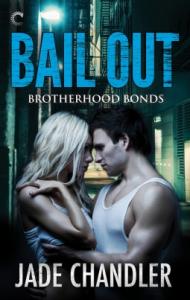 Bounty hunting is in my blood. For generations there’s been a Jackson running Jackson Bail Bonds and that tradition won’t end on my watch. But my father would much rather see a ring on my finger than a pair of cuffs in my hands, and now I have thirty days to either tie the knot or come up with five hundred grand.

Daddy doesn’t know best. Nothing’s going to stand in the way of claiming what’s mine—not even a sexy bounty-hunting biker.

Bonds are my business. I live for the hunt, and if it makes a hefty chunk of change, all the better. The Jericho Brotherhood is the only commitment I intend to make in this life and I swore there’d never be a woman on the back of my bike…until I watched Elle Jackson take down a thug with a smile and a Taser.

When a woman like that asks for your help, you f*ing deliver.

Make sure a knockout, kick-ass woman gets her due? Sign me up. No one is ever going to mistake me for one of the good guys, but for this job, I’m just the man Elle needs.