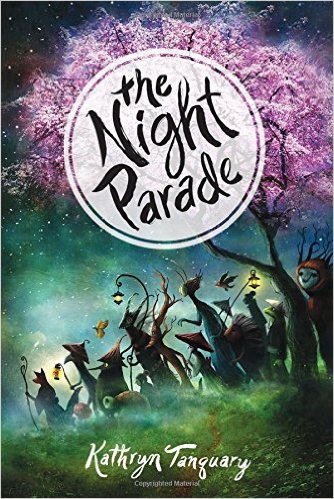 "I thought you might sleep through it." The creature smiled.
Saki's voice was little more than a whisper. "Sleep through what?"
It leaned over. She stared into its will-o'-the-wisp eyes.
"The Night Parade, of course."

The last thing Saki Yamamoto wants to do for her summer vacation is trade in exciting Tokyo for the antiquated rituals and bad cell reception of her grandmother's village. Preparing for the Obon ceremony is boring. Then the local kids take interest in Saki and she sees an opportunity for some fun, even if it means disrespecting her family's ancestral shrine on a malicious dare.

But as Saki rings the sacred bell, the darkness shifts. A death curse has been invoked...and Saki has three nights to undo it. With the help of three spirit guides and some unexpected friends, Saki must prove her worth-or say goodbye to the world of the living forever...

"This adventurous story perfectly mixes Saki's tech-savvy tendencies with ancient Japanese customs, nicely illustrating the connections between the past and the present."
—Bookish.com

"Tanquary excels at creating a world where both Japanese beliefs and cosmic mythology are real and co-exist."
—TeenReads

"This has significant shades of Hayao Miyazaki's Spirited Away, and it will appeal especially to readers with an interest in adventure stories and Japanese folklore."
—Booklist