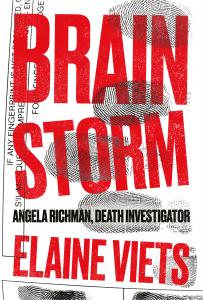 The ultrawealthy families of Chouteau Forest may look down on a woman like death investigator Angela Richman, but they also rely on her. When a horrific car crash kills a Forest teenager, Angela is among the first on the scene. Her investigation is hardly underway, however, when she suffers a series of crippling strokes. Misdiagnosed by the resident neurologist, Dr. Gravois, and mended by gauche yet brilliant neurosurgeon Dr. Jeb Travis Tritt, Angela faces a harrowing recovery.

It's a drug-addled, hallucinating Angela who learns that Dr. Gravois has been murdered, and the chief suspect is the surgeon who saved her life. Angela doesn't believe it, but can she trust her instincts? Her brain trauma brings doubts that she'll ever recover her investigative skills. But she's determined to save Dr. Tritt from a death-row sentence, even if her progress is thwarted at every turn by a powerful and insular community poised to protect its own.

“Cozy veteran Viets (Dead-End mysteries), a stroke survivor, returns to her crime fiction roots with this intriguing tale that will attract forensic mystery buffs and fans of Max Allan Collins’s 'CSI' tie-in series. With its authentic hospital scenes that reflect the reality of stroke victims, this might also be welcomed by family members of such patients.”
—Library Journal


“Devastating migraines send 'death investigator' Angela Richman, the heroine of this well-paced, darkly humorous series launch from Viets (The Art of Murder and 14 other Dead-End Job mysteries), to the emergency room of the Choteau Forest, Mo., hospital, only to be heedlessly sent home by Dr. Porter Gravois… Angela’s endearing, spirited, and resilient humanity resonates on the page..Entertaining.”
—Publisher’s Weekly