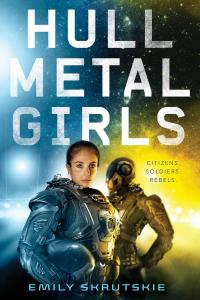 Aisha Un-Haad would do anything for her family. When her brother contracts a plague, she knows her janitor's salary isn't enough to fund his treatment. So she volunteers to become a Scela, a mechanically enhanced soldier sworn to protect and serve the governing body of the Fleet, the collective of starships they call home. If Aisha can survive the harrowing modifications and earn an elite place in the Scela ranks, she may be able to save her brother.

Key Tanaka awakens in a Scela body with only hazy memories of her life before. She knows she's from the privileged end of the Fleet, but she has no recollection of why she chose to give up a life of luxury to become a hulking cyborg soldier. If she can make it through the training, she might have a shot at recovering her missing past.

In a unit of new recruits vying for top placement, Aisha's and Key's paths collide, and the two must learn to work together--a tall order for girls from opposite ends of the Fleet. But a rebellion is stirring, pitting those who yearn for independence from the Fleet against a government struggling to maintain unity.

With violence brewing and dark secrets surfacing, Aisha and Key find themselves questioning their loyalties. They will have to put aside their differences, though, if they want to keep humanity from tearing itself apart.


The Boston Globe’s Best Books of the Year 2018

Reviews:
"Hullmetal Girls feels like an evolution of the sci fi and dystopian works that have come before it — a little Ender's Game, a little Hunger Games, a little Battlestar Gallactica, and a touch of 'what if the Borg were teenagers and only partially assimilated?' Amazingly, it works, and feels like it's honoring these influences rather than rehashing. Its strength is its commitment to the body horror concept, and the freshness of seeing familiar militaristic space opera shenanigans through the eyes of teenaged girls. I for one am ready to give them bionic strength and let them decide humanity's future."
—NPR


"Skrutskie’s tale is packed with diverse characters….Skrutskie’s examination of what defines humanity, family, and free will makes this an engaging, satisfying story."
—Publisher's Weekly


“[Hullmetal Girls] is an unexpected and clever story that is difficult to put down. Skrutskie’s cast of characters, including the adults, is very well developed. The new recruits each have distinct strengths and flaws with unique backgrounds that fuel their individual choices. Characters flow from allies to enemies and back again, as Aisha and Key unravel the mystery at the heart of their society, discovering their own strengths in the process. A great science fiction story for readers who are not interested in romance, this title is recommended for fans of Illuminae by Amie Kaufman and Jay Kristoff and Across the Universe by Beth Revis.”
—VOYA Magazine (starred review)