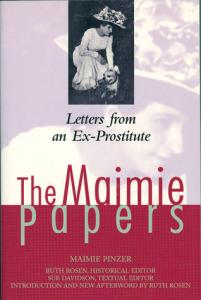 The Maimie Papers: Letters From An Ex-Prostitute

In 1910, a remarkable correspondence began between a wealthy and distinguished Bostonian philanthropist, Fanny Quincy Howe, and Maimie Pinzer, a Jewish prostitute living in Philadelphia and recovering from a morphine addiction developed after the loss of an eye. The Maimie Papers is Maimie’s side of that correspondence, offering an unprecedented and still unique account of the life of a woman of the streets and her inspiring transformation.

An afterword by Ruth Rosen traces the elusive trail of Mamie’s life following the end of her correspondence, from an elegant apartment in Chicago to a new life in the glamorous Southern California of the late 1920s. The Mamie Papers introduces an unforgettable woman with a powerful writer’s voice, of whom the New York Times Book Review says, “Mamie writes like a dream. . . . An astonishing book.”

Reviews:
"An astonishing book....Maimie wrote like a dream, with a witty, sage understanding of the chasm of class."
—The New York Times Book Review


"Maimie wrote vividly and well, spicing her tale of woe with sharp little vignettes, conversations, and quirky reflections. Maimie is worth meeting!"
—The Atlantic


"To be a woman, poor, and alone, in America during the early part of this century was not easy. To survive at all was difficult. Maimie survived—and more, helped others. She was remarkable. She was admirable, but above all, she was lovable. You think how much you would have liked her vitality. I really do recommend the book."
—Doris Lessing, author of The Golden Notebook