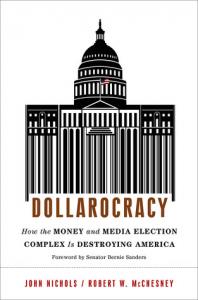 Dollarocracy: How The Money And Media Election Complex Is Destroying America

Fresh from the first 10 billion election campaign, two award-winning authors show how unbridled campaign spending defines our politics and, failing a dramatic intervention, signals the end of our democracy.

Blending vivid reporting from the 2012 campaign trail and deep perspective from decades covering American and international media and politics, political journalist John Nichols and media critic Robert W. McChesney explain how US elections are becoming controlled, predictable enterprises that are managed by a new class of consultants who wield millions of dollars and define our politics as never before. As the money gets bigger—especially after the Citizens United ruling—and journalism, a core check and balance on the government, declines, American citizens are in danger of becoming less informed and more open to manipulation. With groundbreaking behind-the-scenes reporting and staggering new research on “the money power,” Dollarocracy shows that this new power does not just endanger electoral politics; it is a challenge to the DNA of American democracy itself.

Reviews:
“With this book, John Nichols and Bob McChesney invite Americans to examine the challenges facing America in new ways, and to fully recognize the threat that the combination of big money and big media poses to the promise of self-government. They paint a daunting picture, rich in detail based on intense reporting and groundbreaking research. But they do not offer us a pessimistic take. Rather, they call us, as Tom Paine did more than two centuries ago, to turn knowledge into power. And they tell us that we can and must respond to our contemporary challenges as a nation by rejecting the Dollarocracy and renewing our commitment to democracy.”
—United States Senator Bernie Sanders


"Incisive.... [A] fervent call to all citizens."
—Publishers Weekly


"John Nichols and Bob McChesney make a compelling, and terrifying, case that American democracy is becoming American dollarocracy. Even more compelling, and hopeful, is their case for a radical reform agenda to take power back from the corporations and give it to the people."
—Naomi Klein


“U.S. representative democracy is built on four pillars: independent journalists, informed and engaged citizens, fair and free elections, and responsive and responsible government. These pillars have been eroded by what Nichols and McChesney label ‘the money-and-media election complex,' an incestuous and self-interested marriage of big media and big money. The result is a ‘dollarocracy' resting on four new pillars: media corporations, disenchanted and manipulated citizens, elections that go to the highest bidder, and government that is only responsive to and responsible for the needs of the privileged class. Read this book, then go to your window and shout ‘I'm mad as hell and I'm not going to take this anymore!'”
—Michael X. Delli Carpini, Dean, Annenberg School for Communication at the University of Pennsylvania


"Dollarocracy tackles the most important problem in American public life today in a highly readable and truly insightful fashion. Americans know generally that they live in a money-driven political system, but the book is still likely to shock and dismay them. It's particularly good on how the press plays into money politics, making the whole far worse than the sum of the parts."
—Thomas Ferguson, Professor of Political Science at University of Massachusetts, Boston, and Senior Fellow, Roosevelt Institute


“Votes should matter more than dollars. Unfortunately, too many politicians and pundits forget this basic American value. John Nichols and Bob McChesney provide a vivid reminder of why we cannot allow our country to become a Dollarocracy. And they inspire us to make the reforms that are needed to realize the full promise of democracy.”
—Congressman Mark Pocan, D-Wisconsin


"The billionaires are buying our media and our elections. They're spinning our democracy into a dollarocracy. John Nichols and Bob McChesney expose the culprits who steered America into the quagmire of big money and provide us with the tools to free ourselves and our republic from the corporate kleptocrats."
—Lisa Graves, Executive Director, Center for Media and Democracy


"If we want America to be a democracy — and we do — we must guarantee the right of all Americans to vote. John Nichols and Bob McChesney recognize this and their groundbreaking book makes a compelling for placing the right to vote at the center of our urgent struggle to protect and extend democracy."
—Rob Richie, Executive Director, FairVote: The Center for Voting and Democracy


"Dollarocracy is the most important political book of the year, maybe of our times. Nichols and McChesney provide an original and painstakingly researched account of how corporations and billionaires have come to dominate the political process, as well as the contours of what they term the 'money-and-media election complex.' Although I study politics for a living, I learned more about how political advertising works, the crucial role of media corporations and dreadful election journalism than I would have ever imagined possible. In the smartest treatment I have seen, Dollarocracy also details how the Internet is being incorporated into the system; its fantastic potential to empower citizens to battle big money has been effectively neutered. Most important, Nichols and McChesney provide a roadmap to a better and more just election system, built on the foundation of establishing the right to vote. It is an optimistic response to a disturbing analysis. This is exactly the book every concerned American needs to read, because the process of understanding what exactly is going on and taking America back from the corporations starts here."
—Thom Hartmann


"I hope Dollarocracy reaches a large audience, not just among journalists but among the citizens who will produce the next journalism, so we can all move toward a more open, competent and trustworthy press."
—Bill Kovach, former Washington Bureau Chief of the New York Times, and former editor of the Atlanta Journal Constitution


"As Nichols and McChesney's new book shows, the robber barons of the late 19th century were pikers compared with today's moneyed interests. They have hijacked our elections at all levels, and nothing short of the sweeping reforms called for in Dollarocracy can fix the problem. The book is a must read for anyone who cares about the integrity of our democratic system."
—Thomas E. Patterson, Bradlee Professor of Government and the Press, Harvard University


"This is the black book of politics-as-industry, an encyclopedic account of money's crimes against democracy. The billionaires have hijacked our government, and anyone feeling complacent after the 2012 election should take sober note of Nichols' and McChesney's astonishing finding: It's only going to get worse. Dollarocracy is an impressive achievement."
—Thomas Frank


"Dollarocracy gets at what's ailing America better than any other diagnosis I've encountered. Plus it prescribes a cure. What else could a reader--or a citizen--ask? To me, it's the book of the year."
—Michael J. Copps, FCC Commisioner, 2001-2011


"Those of us who have been fighting at the grassroots against the corporate influence on both major parties have for years been waiting for an uncompromising, unrelenting expose of how big money shouts down the voices of citizens. This is it! Nichols and McChesney reveal how billionaires and corporations are buying our media, buying our elections. But Nichols and McChesney don't stop there. They outline an agenda that is bold enough to make this country a real democracy. If you want to build a movement that gives power to the people, you must read this book."
—Tim Carpenter, Executive Director, Progressive Democrats of America


"John Nichols and Bob McChesney reveal that the 2012 election cycle had a price tag of 10 billion. They show us who the money came from and how it was spent. But, most important, they explain why this cannot go on if we are to have fair elections and honest government. With its breakthrough reporting and incisive analysis, Dollarocracy give us the foundation we need to make the case for fundamental change like a constitutional amendment to overturn our system of unlimited campaign spending and restore democracy to the people."
—John Bonifaz, Co-Founder and Executive Director, Free Speech For People. Founder, National Voting Rights Institute