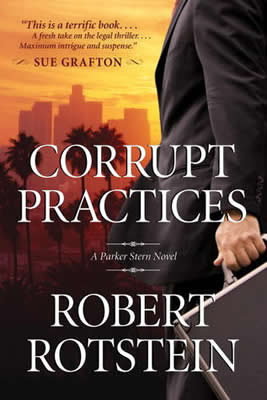 A Los Angeles church, considered by some to be a powerful cult, charges Rich Baxter with embezzling millions. Rich reaches out to former colleague and star trial attorney Parker Stern to come to his defense. Parker despises the cult, but he hasn't entered a courtroom since developing severe stage fright after his mentor, Harmon Cherry, committed suicide. Rich claims that Cherry did not kill himself: he was murdered by someone connected to the church. At first, Parker doesn't believe it . . . until disturbing events force him to question what's really happening.

As the case takes an unexpected turn, Parker surprises himself and agrees to take on the church. But to represent his client and uncover the truth he must overcome his own long-buried secrets.

Reviews:
“A sinister cult, political payoffs, hard-core sex tapes, stories about child abuse and one of the most stressed-out attorneys you’ll ever see. It’s hard to imagine what Rotstein has kept in reserve for the sequel.”
—Kirkus Reviews


“A steady stream of intriguing revelations delivered in a lively, precise style will keep readers turning the pages.”
—Publishers Weekly


“This is a terrific book. Just terrific. Robert Rotstein has come up with a fresh take on the legal thriller and he does a first rate job.  Parker Stern is a complex and well-developed protagonist and the story is beautifully structured for maximum intrigue and suspense.”
—Sue Grafton


“Robert Rotstein has created an unforgettable character in attorney, Parker Stern. He’s unlike anyone I’ve read in literature. Corrupt Practices is an intelligent, fast paced, exciting thriller with an intricate plot that kept me on the edge of my seat. The ending had my heart pounding. I stayed up late, finished it in two sittings, and wished there had been more.”
—Robert Dugoni, New York Times best-selling author of Murder One


“Rotstein’s debut is a tautly constructed, fast-moving narrative with an appealing protagonist—smart, articulate, and crafty—who nevertheless literally faints from fright in front of a judge.”
—Booklist (starred)