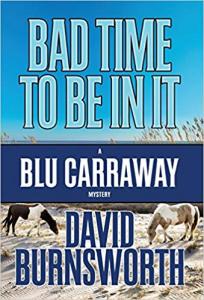 The past is never past. Sometimes it repeats itself. And sometimes it comes back to pay a visit.

Blu Carraway, flush with cash and back in business, never had it so good. Or so he thought.

The reality is his love life is in shambles, his business partner is spending too much time with women half his age and not enough time on the job, and someone close goes missing.

Blu tries to avoid the first and second by focusing on his work, but it's the third that very nearly does him and everyone around him in.

His business partner goes off the rails, his friends show their true colors, and he realizes that getting closure sometimes means walking away from everything.

With a case from the past gone wrong twice, a loved one in trouble, and an unanswered marriage proposal, it's a bad time to be in it for Blu Carraway Investigations.