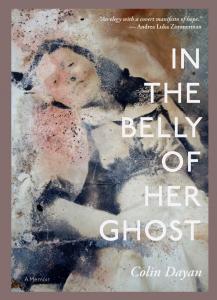 In the Belly of Her Ghost

Colin Dayan’s searing personal narrative is as much a Southern Gothic story as a haunting family portrait. A tale of love and resentment, In the Belly of Her Ghost is a memoir and meditation on the author’s dead mother — a Haitian woman attempting to assimilate into white Southern belle high society during the Civil Rights era. Dayan’s mother grows austere with her newfound glamour and dismissive of her daughter, whose darker skin foments a loving connection with Lucille, her African American nanny. Capturing the bitter struggle of mother and daughter — from her childhood unto death and beyond into the disconcerting present — the memoir is a lyrical journey through memory and loss. Dayan reflects on her complicated origins as she grows into a woman, uncertain if she’s “black” or “white”; we see a gritty, nuanced view of the Jim Crow South. A literary ghost story, In the Belly of Her Ghost grapples with our complicated notions of race, identity, and femininity.

Reviews:
"Colin Dayan’s brief but explosive memoir of her relationship to her mother should find a place among the more indelible life histories of the last several years...Pursued by ghosts, unable to appease or escape them, Dayan casts a spell over the reader, who, immersed in her mind-expanding world of spirits, blood, and dirt, songs and snakes, her mother and the South, wishes the story didn’t have to end. And in a way it doesn’t have to. Because of the vividness of its scenes and the power of its language, and because it thrusts us into realms not usually visited in memoir, it will go on my shelf for a while, and then, I know, it will come back to life, a revenant, just as alive the second or third time around as it was before."
—Los Angeles Times

"The memoir is a lyrical journey through memory and loss... A literary ghost story, In the Belly of Her Ghost grapples with our complicated notions of race, identity, and femininity."
—Los Angeles Review of Books

“I really loved this book for its refusal to accept the usual academic rejection of emotion, fantasy, superstition, magic, intuition, and the power and energy of material things. Life in Dayan’s universe is a lot more mixed-up, complicated, interesting, ecstatic, scary, and full of possibility than the standard version.”
—Jane Tompkins, literatry theorist and author of Reading through the Night

"In times such as ours, and the times from which they spawned, ages of violence against all forms of 'other' — genders, bodies, skins, ideas — how can we lay to rest the ghosts that haunt us, and invite to the table those that help us live? Writing from the headlands far into the interior, threading the personal with the public, an  elegy with  a  covert manifesto of hope, Colin Dayan understands what it is to be haunted: by history, by race, by family, by what presses on the definitions of one’s life.  In pages at once strikingly evocative, allusive, and embodied, rigorously sensory in their hard-won wisdoms, Dayan argues for the co-existence of species, variants of identity and belonging, a commonwealth of the living and the dead. In the Belly of Her Ghost imbues profound remembering with a democracy of looking and listening, where all that matters — objects, animals, people and place — is properly attended. It is a volume appearing undeniably in its necessary moment, and it is precisely necessary because the truths it speaks are as old as our troubles, as required as our joys.
—Andrea Luka Zimmerman

"This subtle, ambivalent, deeply thoughtful book makes nothing easy — difficult moments are imbued with grace and familiar parades of ghosts. We hear a series of conversations: with the past, with selves old and new, with memories of Haiti and the American South, with a black woman who effectively mothered the writer, with an actual mother both dead and alive. How many of us could so lucidly say of a disappointed and disappointing parent, 'I did not want to love her as much as I did'? At the center of this haunting narrative is an unforgettable ghost story, which, ultimately, is not quite a ghost story at all."
— Michael Wood

"I sat rapt, coiled tensely around myself, awaiting I didn’t know what exactly, nothing I could put a name to, but something I felt a fierce identification with, an anxious anticipation, a premonition of dread, a shroud of sorrow, a life encompassed by secrets. In The Belly of Her Ghost is a soul story that resonates in the body of anyone who has been or is cast out of anywhere she calls home. It’s allusive, elusive; its strength is its narrative freedom from story as we know it. Its brilliance in earth shimmers (I will never again think of a summer night in nature in any other way). Its time is archetypal, images, ideas, affects evanesce and return. For this country is timeless."
— Wendy Lochner

"This is no ordinary family story: it is a lyrical telling of how racial terror and patriarchy reverberate in our most intimate relationships; it is about love aborted and love forged in violence and repression. As rejection, loss, and self-loathing simmer on the surface, this beautiful and desolate work recounts social harms and personal grievances. But it also bears witness to the persistent longing for connection that we carry with us and reminds us of what remains: an abiding faith that love can make you whole, even in death."
—Deborah Chasman

"Colin Dayan has one of the most original minds in America and also one of the fiercest. Here for the first time she turns her rigorous intellect toward her own life, onto her vexed relationship with her mother and subsequent suffering — and she does so with her usual uncompromising clarity. It’s rare for such a tormented work to be so masterful."
— Madison Smartt Bell