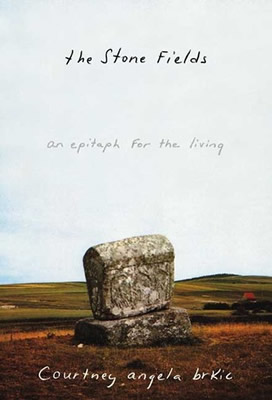 The Stone Fields: An Epitaph for the Living

When she was twenty-three years old, Courtney  Brkic joined a UN-contracted forensic team in eastern Bosnia. Unlike many aid workers, Brkic was drawn there by her family history, and although fluent in the language, she was advised to avoid letting local workers discover her ethnicity. Brkic helped set up a morgue in Tuzla, assisting pathologists with autopsies and laying out personal effects for photographing. Later, she helped excavate graves at Srebenica, where many thousands had been indiscriminately slaughtered.

This was not the only excavating she was doing. As she describes the gruesome work of recovering remains and transcribing the memories of survivors, she also explores her family's history in Yugoslavia, telling of her grandmother's childhood in Herzegovina, early widowhood, and imprisonment during World War II for hiding her Jewish lover. The Stone Fields, deeply personal and wise, asks what it takes to prevent the violent loss of life, and what we are willing to risk in the process.

Reviews:
“Brkic intertwines her family’s poignant story, including the lives of her grandmother and aunts who lived through World War II and the recent Balkan conflict, with her own experiences on the forensics team. The result is part memoir, part history and part political commentary, stitched together in a beautifully wrought, sensitive prose that makes reading about war and ethnic cleansing bearable and inspires an unremitting desire for peace at last.”
—The Seattle Times


“Being an archaeologist, Brkic digs for sometimes distant, sometimes recent history, putting her findings into beautiful and poetic language that conjures up lively imagery. She also possesses a fascination with memories coupled with a vivid imagination that lets her re-tell her grandmother’s upbringing as if it were her own, although she never actually met her. Describing herself as an ‘inheritor of stories,’ she weaves through layers of past and present in a deeply personal, diary-style narration filled with persecution, forbidden love, betrayal, to her own experiences in present-day Croatia, Brkic’s stories bear testimony to the fact that the human capacity for evil in infinite and remind us that peace is fragile and demands great efforts.”
—San Francisco Chronicle


“[Brkic’s] talent with the language of fiction brings on a nonfiction narrative with true softness. The telling of her grandmother’s life is exquisite. Its reach and intensity delve into the 20th century history of her ancestral lands and of human nature—its cruelties and its kindnesses, its betrayals and sacrifices.”
—Los Angeles Times


“Caring precariously for her frail baby, Courtney Angela Brkic’s Croatian grandmother, Andelka, was instructed by a village neighbor to put a pine cone in his cradle. To acquaint him with hardship….The Stone Fields is a pine cone that Ms. Brkic has rolled into our cradle to acquaint us with hardship. Not Andelka’s hardship; in fact the grandmother’s story, written with lyrical precision, provides much of the buoyancy and lovely evocation in a memoir that knows a darker pain and darkly denounces it. It is the genocide that took place in Bosnia in the early 1990’s, whose most atrocious example was the elimination by Bosnian Serbs of an estimated 7,000 Muslin inhabitants in the town of Srebenica.”
—New York Times


“The Stone Fields has a haunting, lyrical economy. Brkic wonderfully blends precise depictions of a harsh land and hard lives with a deep and sympathetic understanding of what people have endured. Added to this is a keen self-awareness that never becomes self-indulgence. It’s a book designed to banish ignorance, and it goes a long way toward its goal.”
—San Jose Mercury News


“Whiting Award winner Brkic returns with this affecting genre crosser. Part history, part memoir, and part family saga, the book starts out as an account of Brkic’s work at a morgue in Tulza, Bosnia, where she worked with a UN forensic team to uncover the victims of the war’s ethnic violence. It then shades in and out of the author’s own family history, concentrating on the story of her Herzegovinian grandmother, who was widowed early on and imprisoned during WWII….Hypnotic. Poetic writing…and vivid imagery bring this area and its people to life with a certain amount of exoticness and mystery.”
—Library Journal


“…heartbreaking….Whiting Award winner Brkic’s haunting, hopeless memoir is an agonizing treatise on the awful cost of war and its long, pain-stoked aftermath in which, as she records it, those outside forget and those inside can barely continue living.”
—Publisher’s Weekly


"With her poet's eye for the passionately telling detail and her archeological patience for emergent patterns, Brkic, who won the Whiting Award last year for her story collection Stillness, achieves a cumulative power that sticks in the mind as stubbornly as the clay from Bosnia's "vast fields of churned ground," glued with its dark secrets to her boots."
—Elle


“Short-story author Brkic (Stillness, 2003) combines a stirring, elegant memoir of time spent picking up the dreadful remains of recent Balkan history with an exploration into her grandmother’s life in the region . . . . the author retells a grim story of internal exile and young widowhood, arrest for harboring a Jewish man during WWII, striving to stay put on shaky ground during the time of Tito vs. Stalin. That same ground shakes Brkic as well: she washes bones that have been delicately excavated, or dries clothes in hopes that they may be identified and a family’s hopes laid to rest.”
—Kirkus Reviews