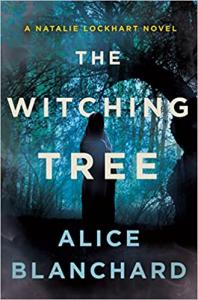 Welcome to Burning Lake, a small, isolated town with a dark history of witches and false accusations. Now, a modern-day witch has been murdered, and Detective Natalie Lockhart is reluctantly drawn deep into the case, in this atmospheric mystery from Alice Blanchard, The Witching Tree.

As legend has it, if you carve your deepest desire into the bark of a Witch Tree, then over time as the tree grows, it will swallow the carvings until only a witch can read them.

Detective Natalie Lockhart gained unwanted notoriety when she and her family became front and center of not one, but two sensational murder cases. Now she’s lost her way. Burned out and always looking over her shoulder, Natalie desperately thinks that quitting the police force is her only option left.

All that changes when a beloved resident—a practicing Wiccan and founder of the town’s oldest coven—is killed in a fashion more twisted and shocking than Natalie has ever seen before, leaving the town reeling. Natalie has no choice but to help solve the case along with Detective Luke Pittman, her boss and the old childhood friend she cannot admit she loves, even to herself. There is a silent, malignant presence in Burning Lake that will not rest. And what happens next will shock the whole town, and Natalie, to the core.


"Set in Burning Lake, N.Y., Blanchard’s creepy third novel featuring police detective Natalie Lockhart (after 2020’s The Wicked Hour) infuses a procedural with an ambient horror vibe. When Veronica Manes, a white light Wiccan and the beloved leader of one of the two traditional covens in town, is found murdered along the train tracks, dressed in a Halloween witch costume, Natalie, who was planning to resign from the force after the emotional burden of her personal involvement in two earlier murder cases, decides instead to join the investigation alongside Lt. Det. Luke Pittman, with whom she shares an awkward, more than collegial closeness. The most obvious suspects are the couple who misused a local minister’s crash space to party and perform dark rituals, but Natalie’s search uncovers some Burning Lake history tied to a centuries-old curse that points elsewhere. Though the winding investigative path keeps the reader invested throughout, Blanchard frustratingly abandons a firm resolution to the case in favor of a pile of loose ends that ramp up the multivolume arc of dread. This is not the place to start for newcomers."