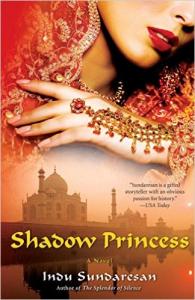 The daughters of Emperor Jahangir, Jahanara and Roshanara, plot and scheme against one another in an attempt to gain power over their father’s harem. As royal princesses they are confined in the imperial harem and not allowed to marry. However, this does not stop them from having illicit affairs or plotting the next heir to the throne. These royal sisters are in competition for everything: power over the harem, their father’s affection (still focused on his dead wife), and the future of their country. Unfortunately, only one of them can succeed. And, despite their best efforts to affect the future, their schemes are eclipsed, both during their lives and in posterity, as they live in the shadow of the greatest monument in Indian history, the Taj Mahal.

With a flair and enthusiasm for history and culture, Sundaresan creates a story full of rich details that brings the reader deep into the world of the lives of Indian women and their struggles for power and consequence.

Reviews:
“Heavily researched and expertly written, Shadow Princess can be enjoyed without the benefit of having read its predecessors. Nonetheless, it is recommended that the trilogy be respected for the author’s natural storytelling talent, clarity of purpose, and ability to bring history to life. Every character breathes, feels, and moves across the page, capturing the reader’s heart without reservation. These novels are about the strength, cleverness, and determination of acutely focused women. … Sundaresan is at her finest drawing a picture of 17th century Hindustan that sparkles with gems, gleams with marble, and tantalizes with the colors of rich fabrics and precious metals. Even when she places her sights just outside of historical fact, her writing seamlessly bridges the gap. Showcasing the Taj Mahal, Shadow Princess is an exhilarating mixture of character and event, emotion and intrigue, extravagance and architecture.”
—India Currents