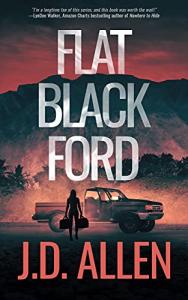 Jim Bean comes face to face with his greatest adversary so far-a con woman who is as clever as she is dangerous.

Stella DeSoto has had it with Vegas and her life. She's experienced the worst of people, and now a sailboat in the Florida Keys is calling Stella's name. All she needs is the cash to buy it.

And she's got an idea.

It's reckless, risky, and downright illegal.

But big risks can mean big rewards... if you don't get caught.

Then Stella's mother recognizes her on the news, disguised and on a crime spree. Worried sick, she hires Private Investigator Jim Bean to track her daughter down.

Only after he agrees to help does Jim realize just how cunning Stella is-and how desperate. And a seasoned PI like Jim has enough experience to know that's a very dangerous combination.

As Stella manages to stay one step ahead of him at every turn, Jim wonders if he'll ever be able to track her down-and how many more people will get hurt if he can't.

J.D. Allen's Flat Black Ford is a fast-paced story of anger, escape, and revenge that will leave you questioning the meaning of right and wrong, and the gray area in between.