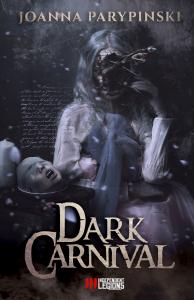 For fourteen years, Dax Howard has lived with the mystery of his mother’s disappearance. He’s tried to put it behind him: getting out of his dying rural hometown, going to college, studying astrophysics. But his father couldn’t get over his loss, wallowing in alcoholism and conspiracy theories about the traveling carnival that he believes kidnapped his wife. Dax never thought he would return home, but when his father dies, he has no choice but to face his past—and the possibility that his father may have been right all along…What he finds in Conjunction, Nebraska is a bloodthirsty sheriff, a collection of missing teenagers, and a death-worshipping cult led by a strange girl intent on summoning an ancient being down from the stars. If Dax wants to finish what his father started, he’ll have to uncover the secrets of the cult and find the carnival himself… unless the carnival finds him first.

Reviews:
“A truly chilling novel with an ending that will take your breath away. Mad Catherine's house is (literally) the stuff of nightmares, and in Julian, Jo has created one of the most frightening characters I've come across since Gabe from Pet Semetary. I couldn't read it too late at night, and I had to cover up my mirrors! Also very glad I live in a modern house nowhere near a swamp.”
—Melanie Golding, author of Little Darlings